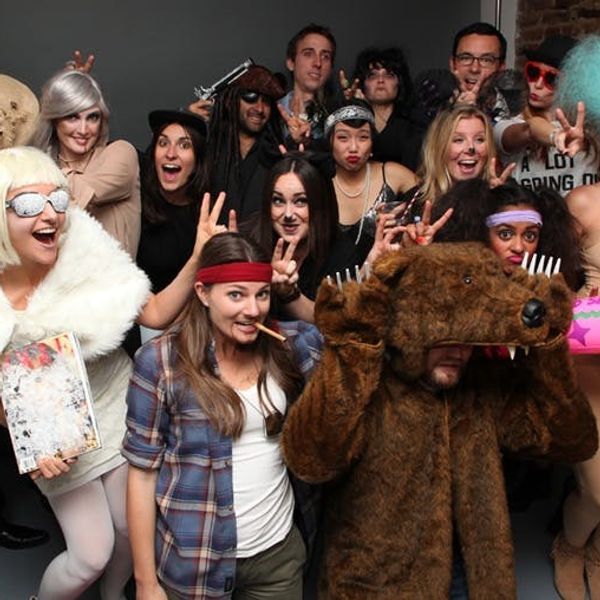 In our opinion, Halloween is a holiday that we’d be happy to celebrate all year long. That’s why we’re already revving up for Halloween 2014! The first thing we’re doing? Sharing all of the awesome DIY moments from our first ever Halloween party so you can take note for next year.

1. Washi Web Dance Floor: What is better than a regular old dance floor? One that is covered with washi tape! We were trying to figure out how to define part of the party space as the dance floor when we remembered our old friend washi. We created a spiderweb design, but you could really do anything geometric.

Let’s be real for a minute. A photo booth has become a party must-have. We hired a Task Rabbit to man our camera (he also happens to be an event photographer!), and set up a tripod and backdrop right in our office. For props, we printed a few mustaches and glasses, and picked up some odds and ends around town. See the best of the best photo booth pics here.

We greeted people with a scene straight from our Creepy Party. The test tube wine shooters were especially creepy, but the syringes definitely took the cake. We mixed up Red Bull, vodka, and grenadine to make for a blood-curdling good time!

All Thriller, All the Time

5. Costume Contest: You’ve gotta have a costume contest! There were so many insanely awesome costumes at this party that it was darn tough to choose just a couple winners. For the individual contest, this buff Lionel Richie took the prize. And for a group costume, these two paper dolls stood a cut above the rest.

6. Black Light Rave Room: You didn’t think we made all that glow-in-the-dark decor for nothing, did you? We created an entire “rave room” straight from the ’90s with black lights, glow-in-the-dark bugs, and more.

Our very own marketing gal Francesca made a delicious collection of blondies and candy bark. You can totally use our bark recipe for holiday treats as well!

8. Dogs in Costume: When in doubt, dress up your dog. That’s all there really is to it ;)

9. Glowing Cobwebs That Look Like Bats: You know when you make something and you think it’s one thing but then it’s something way more awesome. Roxy, one of the frequent DIYers here at Brit HQ, put up a whole bunch of cobwebs on the ceiling, and then they looked just like bats when the lights went off. Awesome!

Of course, what’s a party at Brit HQ without a DIY marquee? This one illuminated a taco station from SF favorite Tacolicious.

Special thank-yous to these folks who helped make our party off the chain!

DJ Celeste Lear: Our DJ rocked! We met DJ Celeste when she rocked out at Re:Make and knew she was just the special sauce needed to make our Halloween party a total dance party. Well done Celeste, well done.

Sugarwish: Trick or treat! Sugarwish provided all of the candy for the party, and we definitely saw a bunch of partygoers treating it up.

Mike DiMo: This Peter Pan doubled as the party photographer all night long! All the photos you see in this post (except for ones from the photo booth, including this one of Mike DiMo himself) were taken by him.

Target: Thanks to Target for pimping out our photo booth with a whole bunch of crazy gigantic wigs.

Griz Coat: Finally, even though Griz Coat wasn’t an official partner on this party, the moment that the Griz Coat founder showed up and embraced in a bear hug with our very own designer Aaron was, in a word, magical.

And that’s a wrap! What did you Halloween party look like? Did you incorporate any of the decor or recipes you saw on our site? Talk to us in the comments below.

Anjelika Temple
As Co-Founder and Chief Creative Officer of Brit + Co, Anjelika Temple brings her voracious consumption of all things creative and colorful to DIY projects, geeky gadgetry finds and more. When she's not DIY-ing her heart out, you'll find her throwing dinner parties with friends or adventuring with her husband David, their daughters Anokhi and Indira, and their silly dog Turkey.
Brit HQ
Halloween Costumes
Brit HQ Halloween Halloween Costumes
More From Halloween Costumes