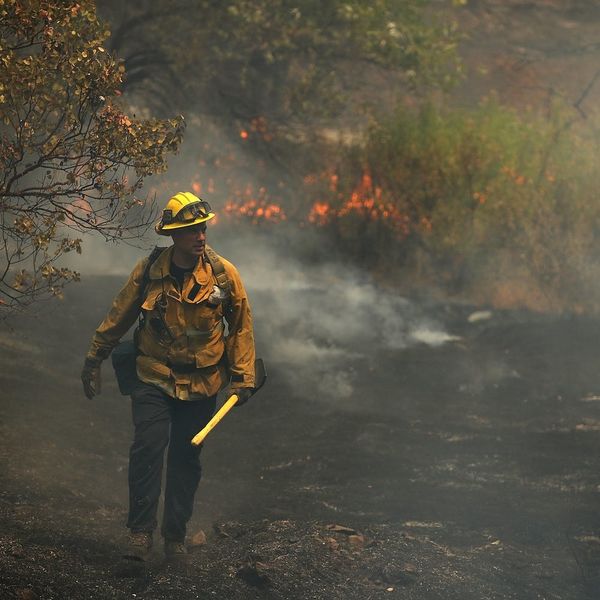 It’s wildfire season in northern California again, where the Carr wildfire — a blaze that began last week — has already claimed as many as eight lives. The fire started late last Monday, and grew considerably over the weekend, doubling in size to cover more than 98,000 acres at its peak. Among those who have died so far in the fire are two firefighters, a great-grandmother, and two young children. An additional victim was recovered on Sunday but has not yet been identified.

The fire has destroyed 960 buildings, including 720 homes, the BBC reports. An additional 200 buildings have suffered damaged, and another 5,000 are at risk of being damaged or destroyed. Around 3,400 firefighters are currently working on the blaze, and 38,000 people have been evacuated from Shasta County.

Forest firefighters combating the Carr fire have noted that, in recent years, wildfire season is lasting longer and bringing fires that are more difficult to contain. James Sweeney, a “hotshot” firefighter who fights wildfires, told the Associated Press that with northern CA wildfires, “These days it’s crazy.” He added, “We give up our whole life all summer” to fighting fires.

Climate scientists, environmental rights advocates, and forest firefighters have been sounding the alarm about longer wildfire seasons for years now. According to the Union of Concerned Scientists, a not-for-profit advocacy group, warmer spring seasons have led to drier soil and foliage, effectively turning massive swaths of land into potential kindling for huge fires. Additionally, longer summers mean that the weather conditions necessary for wildfires have also been extended. Wildfires are tending to last longer, leading to more devastating impacts.

Wildfires have been worse than usual lately, but this year is particularly bad so far. Some experts are saying that this is the worst start to a wildfire season in a decade.

Firefighters are making progress on the Carr fire. Working literally around the clock using fire equipment and helicopters, firefighters have successfully contained 20 percent of the fire, according to the California Department of Forestry and Fire Protection. The CDFFP stated in a Monday report that, “Today crews will work to mitigate potential spot fires as shifting winds, dry fuels, and steep drainages exist below control lines.”

And yet, the Carr fire is just one of eight major fires the state of California is contending with right now. The Carr fire has been the most deadly so far, but other counties are still dealing with significant blazes. Wildfire season is only just getting started, with more large fires still expected in the coming months.

San Francisco’s ABC 7 News has put together a list of resources for anyone who wants to help people who have been hurt or displaced by the blaze:

GoFundMe has a running list of verified campaigns supporting individual families whose homes were destroyed in the fire. The company has also teamed up with Tri Counties Bank to establish a general fund benefitting victims across Shasta County.

The Red Cross has opened multiple shelters to house wildfire victims and others who were forced to evacuate as the flames neared their neighborhoods. Text REDCROSS to 90999 to make a $10 donation.

The United Way of Northern California has established a Shasta County Fire Relief Fund. Text CARRFIRE to 91999 or visit the organization’s website to make a donation.

The Haven Humane Society is raising money on Facebook to support its efforts to house animals displaced by the fires. If you live in the area, you can also donate dog and cat crates, food, and water bowls.

Facebook has activated its Crisis Response feature for those in Shasta County. Victims can use the feature to post individual requests for aid, and people looking to help out can offer their services.

Elizabeth King
Elizabeth King is a politics, history, and culture writer based in the Twin Cities. She is generally pretty cranky but still enjoys traveling, music from the early 2000's, and plotting the resistance. Feel free to say hi on Twitter at @ekingc or check out some of her work at www.elizabethcking.com.
Environment
Current Events
Environment
More From Current Events