For the Women Fighting California’s Wildfires, Physical Danger Is Only One Challenge of Many 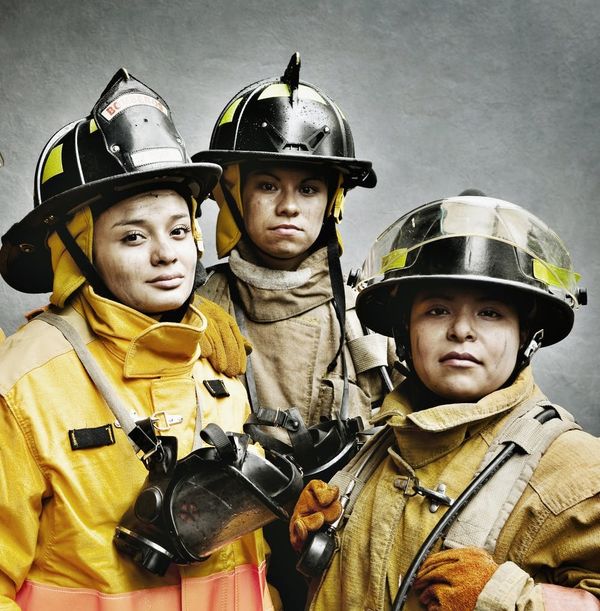 For the past three days, an estimated 1,600 firefighters have put themselves face-to-face with extreme heat and fluctuating winds, fighting the wildfire that is ravaging parts of northern California.

Beginning on Sunday night, several fires formed in northern California’s wine country, which quickly grew into a large-scale catastrophe that is still razing through the area. As of Wednesday morning, the Los Angeles Times reports that 17 people have been killed by the fire, and as of Tuesday afternoon, around 180 people were missing, according to a separateTimes report. Meanwhile, firefighters continue to risk personal injury in order to contain the flames.

Though the stereotypical image of a firefighter is a guy dressed in red, many women face the risks involved in efforts to put out wildfires as well. Anastasia Selby, who fought fires between 2000 and 2010, four of those years on hotshot crews (crews that fight wild land fires) in Oregon, California, and Alaska, tells Brit + Co: “The work is grueling, and we often got about five to six hours of sleep a night.”

In a piece she recently published for Vox about wildfires and climate change, Selby also noted that hotshot crew members, who risk their lives doing dangerous labor, are paid only around $15 to $17 an hour.

The physical aspect of this work is grueling. Selby tells us that by the age of 27, she had fractured both ankles and had the first of two knee surgeries she would undergo due to the physical demands of her job. The gear that crews are outfitted with is minimal. Selby says that she only had “fire-resistant pants and shirt, boots, and other minimal [protections]” to stand between her and the massive flames and heavy smoke.

It’s also a very tough job emotionally. “The thought of death has to be compartmentalized and stored out of sight,” Selby says. “One must be hyper-vigilant when working because if you aren’t paying attention, something could go wrong.”

But the most challenging part of her job, Selby tells us, was the power structure: “I was either the only woman or one of two on a crew. That was hard. Sexual harassment was inevitably part of the job.”

While (under)paid hotshot and local fire crews work to stop fires in California and elsewhere, incarcerated women also risk their lives to fight wildfires in California. In California, both incarcerated men and women can opt to work on fire crews, and are paid only around $2 an hour. NBC Los Angeles reported Wednesday that of the estimated 3,800 inmates currently fighting California’s fires, some 200 are women.

In a report published earlier this year, the New York Times noted that incarcerated people who fight fires are only given about three weeks of training before they head out and take on the flames. 35-year-old La’Sonya Edwards, who was working on fighting a fire in Malibu, told the Times, “This isn’t that different from slave conditions. We need to get paid more for what we do.”

As firefighters continue their work to contain one of the worst fires in modern California history, it’s important to remember the human element of natural disasters. Not only for the people whose lives are lost as they evacuate or try to save their homes, but also the people, some of whom are women, who risk their health, emotional well being, and lives to fight fires. As wildfires become more pernicious as climate change worsens, the safety and fairness of pay for those who put them out must also be considered.

Elizabeth King
Elizabeth King is a politics, history, and culture writer based in the Twin Cities. She is generally pretty cranky but still enjoys traveling, music from the early 2000's, and plotting the resistance. Feel free to say hi on Twitter at @ekingc or check out some of her work at www.elizabethcking.com.
Environment
Current Events
Environment
More From Current Events