Come Inside the First Ever Pop-Up Cat Cafe (Curiosity Is Safe Here!) 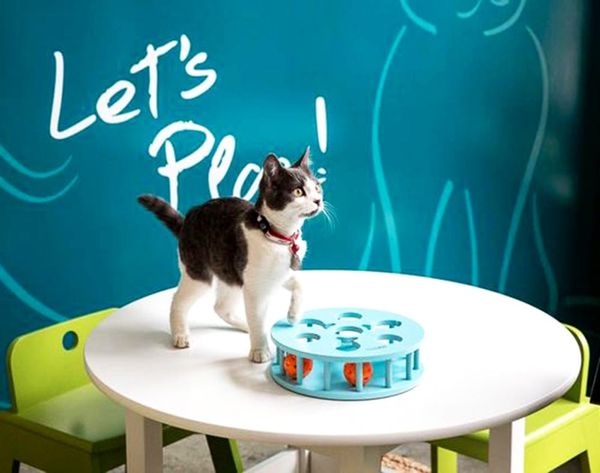 Would you like a cat’achino with that biscotti, ma’am? That’s the exact question they’re asking at the opening of North America’s first ever cat cafe. The paw-p up shop at 168 Bowery in Lower Man-Catten is the premiere destination for cuddling up to a kitten while sipping your afternoon espresso. And one of them the cafe really wants you to take To Go…

Pet food purveyors Purina One are behind the store, which is open for sipping and petting to the public today until Sunday, April 27. We don’t know what the health code violations are here and we don’t care — what’s going on at 168 Bowery is part of Purina’s 28 Day Challenge, a push to get cat owners talking about their furry friends’ health with on-hand experts. More importantly, all of the tabbys and tomcats rubbing on your pant legs and sunning in the cafe’s windows are up for adoption and hope to be in homes (as stylish as these?) by the end of the week.

If you wish you could be there pawing a ball of yarn around with a new feline friend, we have the next best thing. Check out the livestream, which would only be better viewed with an Oculus Rift. We don’t want to spoil anything for you, but, as you would expect, there’s crazy amounts of cuddling, some serious preening and a whole lot of heavy petting going on.

SFers, don’t FOMO just yet — a cat cafe called KitTea is opening in the Bay Area later this year and the owners’ vision for it is “part ‘gourmet tea house’ and part ‘cat and human oasis.'” We are part “huh” but a much bigger part “awww,” so make ours a double (that’s shots in our cat’acino + two cats to play with pls).

Would you visit a cat cafe to grab a cuppa joe? What’s next — a dog diner?! We’re in. Sound off below.

Lisa Raphael
In her past professional lives, Lisa has served the masses as the Editorial Director at Brit + Co, Bieber Whisperer at J-14, Golden Girls Fan Club Prez at Lifetime and Talk Show Host Understudy to Katie Couric. Now, she's taking on the sports world at The Relish, teaching Hairography 101 in her spare time and will forever be trying to fill the hole Zayn Malik left in her heart.
Cats
Entertainment
Cats
More From Entertainment