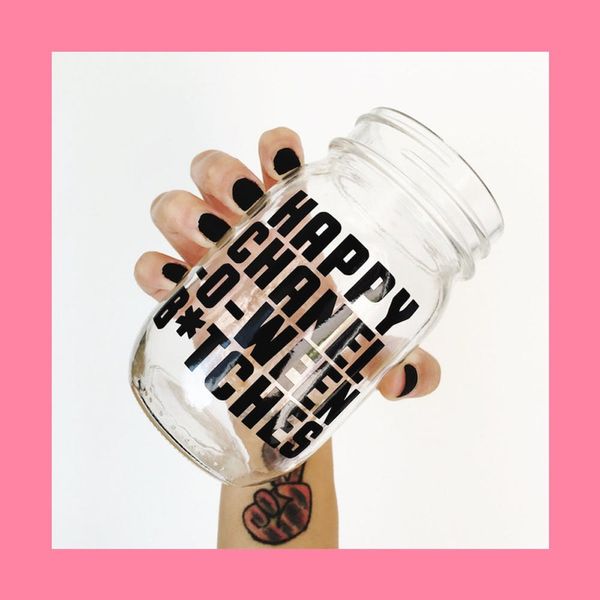 To quote the original Scream Queen, Chanel No. 1, “What the fresh Hell!?” If you haven’t already caught on, Scream Queens is coming back to FOX September 20. Viewers beware, ’cause this horror/comedy/drama isn’t for the faint of heart and mostly like is not for your momma. In season two, expect a whole new cast ensemble (as well as some past season repeats), a new chilling setting and, yes, lots of bizarre fashion choices. Of course, you won’t want to watch season two alone, nor would you want to be underdressed for the occasion. Luckily, there’s a spooktacular list below of fluffy #ootn and pink-inspired party ideas for the most horrific yet fashionable tv premiere party. Like ever.

1. Bubblegum Cloud Slices: Chanel No. 1 and her minions (Chanel No. 2, 3, 4 and so on) may be the queens of their former sorority house, Kappa Kappa Tau, but they are also the official/unofficial poster girls for bubblegum. You can’t throw a Scream Queens party without a burst of bubblegum. Well, you could try, but it won’t go over well. These yummy Bubblegum Cloud Bars from Confessions of a Cookbook Queen take the slice. (via Confessions of a Cookbook Queen)

2. Pom-Pom Girls: Pom poms have become massively popular these past few years, and it’s more than likely thanks to the fashions seen on last season’s Scream Queens. Polish/pom your nails for the season two premiere with a little help from the colorful blogger Aww, Sam. (via Aww, Sam)

4. Pink Lemonade: Surely you’ll be parched from all of the screams, gasps and awes. Quench your petrified palette with a mason jar of freshly squeezed lemonade. Feel free to add some vodka or gin to really take the scary edge off. (via The Tom Kate Studio Blog)

5. Kimmarashallcouture Pink Feather Duster ($795): So, this ah-mazing pink furry duster is a total splurge, but if you’re the ultimate SQ fan you’ll understand why it is a must-have accessory. What do you say, channel your inner Chanel?

6. The B**** Apple: Chanel No.1 said it herself, “The b*tch apple doesn’t’ fall far from the b*tch tree.” Well, let’s not get too graphic, but these pink and white candy apples are to die for. Hopefully not literally… (via Best Friends for Frosting)

7. Marquiamakes Chanel-O-Ween Money Jar ($18): You have to save your tweed Chanel jacket from spills somehow, right? Pick a few of these sturdy drinking glasses up for your DIY cocktail station or DIY your own with your fave SQ quotes.

8. Crown a Scream Queen: A crown DIY project seems to be fitting for a girls’ (rather, ghouls’) night in. (via Studio DIY)

9. EpicsIDs Chanel’s ID ($15+): You’ll be the queen of the party with a replica of Chanel Oberlin’s KKT school ID. Psst. There are rumors that Chanel (and the others) are totally out of the KKT house and are the permanent residents of an insane asylum. Gasp!

10. Aprildelouvre Embellished Earmuffs ($70): Season One of SQ brought back the earmuffs. Except now, this ear candy is jeweled and downright fabulous. Make them yourself or purchase a pair. You never know who’s out for your ears.

11. IndiaSpenceArt Embroidered Patches ($18) The Red Devil was the campus killer last season. Will he return this year? Better keep your enemies close, so why not wear him on your sleeve?

12. 8BitSpok Sorority Letters ($11): Planning on rushing for Kappa Kappa Tau this year? Rumor has it that the old Scream Queens are locked away, so the chances of you getting in are dead-on!

13. MissTourture Pom Poms Key Chains ($12): Lucky number 13 is a set of pom-pom key chains. These function as both a fashion accessory and a right of KKP passage.

Well, ladies, are you ready for a fashionable yet dreadfully divine night of screams, chills and Chanel laced pearls? Looking for more SQ ideas and outfits? We got some creative concepts on Pinterest.

Katelyn Chef
Katelyn is a writer, blogger, eyeglass lover, & avid crafter. When she isn't working, you can catch Katelyn polishing up on her photography skills, browsing her Instagram feed, daydreaming about hydrangeas, & of course, sipping an iced coffee.
Halloween
Party
Halloween Party Ideas
More From Party