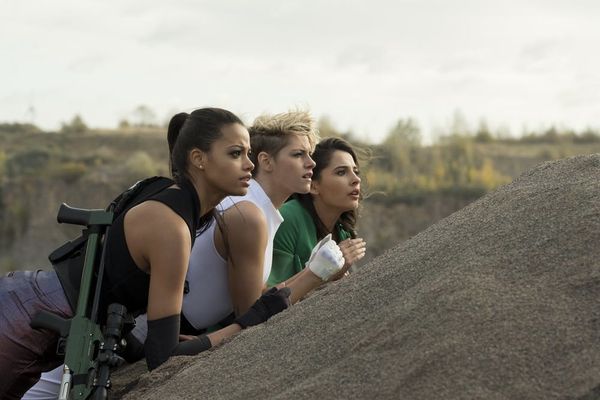 Good evening, Angels! There are still seven months to go until the release of Elizabeth Banks’ Charlie’s Angels movie, but thanks to Sony Pictures, we now have our first look at the new trio of crime-fighting ladies played by Kristen Stewart, Naomi Scott, and Ella Balinska.

If you’re into the ladies’ slick new look, you can thank Banks. Her film is a sequel to both the original 1970s series and the early 2000s movies starring Drew Barrymore, Cameron Diaz, and Lucy Liu. That means that the mysterious Charlie has been successfully running his operation for more than 40 years. And Banks thought it was important to reflect that success.

“If you were rich in 1976, you only got richer,” the director, who also co-wrote the script, told Entertainment Weekly. “Charles Townsend is richer than ever, so he’s grown the business into a global spy agency.”

Banks will appear in the movie as one of several Bosleys — now a title rather than a character’s name. Patrick Stewart and Djimon Hounsou will also be Bosleys. “‘Bosley’ is now a rank in the organization, like lieutenants,” Banks explained to EW. “All of the Angels have been played by different women and have had different names, but the Bosley character was always named Bosley no matter who played him. We thought, ‘Well, that must mean it’s more than a name.'”

As for the Angels themselves, Stewart will be playing Sabina Wilson, a wild card who likes to party and is very skilled at what she does. Balinska has taken on the role of Jane Kano, ex-MI6 muscle. And Naomi Scott, who has another breakout role as Princess Jasmine in Disney’s live-action Aladdin, will play Elena Houghlin, an MIT-trained scientist who Banks calls “the heart of the movie.”

The film also features Noah Centineo, but Banks is keeping the details of his character under wraps. “I don’t want to give too much away about Noah,” Banks told EW, “but he’s a friend mostly to Naomi’s character.”

Anyway, the main focus is the ladies’ teamwork. “It was important to me to make a movie about women working together and supporting each other, and not make a movie about their romantic entanglements or their mother they don’t call enough,” Banks told EW. “When I’m at work, I don’t talk about those things. I get on with my job. It felt important to do that for the Angels, to treat them with the respect their skill set demands.”

Desiree O
Desirée O is a ‘Professional Bohemian’ who loves anything and everything related to the arts, entertainment, and pop culture. She ADORES being a ‘Newsy’ for Brit + Co, covering all of the latest tidbits of awesomeness that you want to read about. When she’s not writing, she’s either making messy art, going on long adventurous walks with her camera, or poking around over at bohemianizm (http://www.bohemianizm.com/). You can find out about Desirée O and her work at http://DesireeO.com/ or follow her on Twitter @DesireeO.
Celebrities
Movies
Celebrities Celebrity Movies
More From Movies

Drew Barrymore Reveals Which of Her Movies Her Daughters Love Most