11 Classic Disneyland Rides That Never Go Out of Style 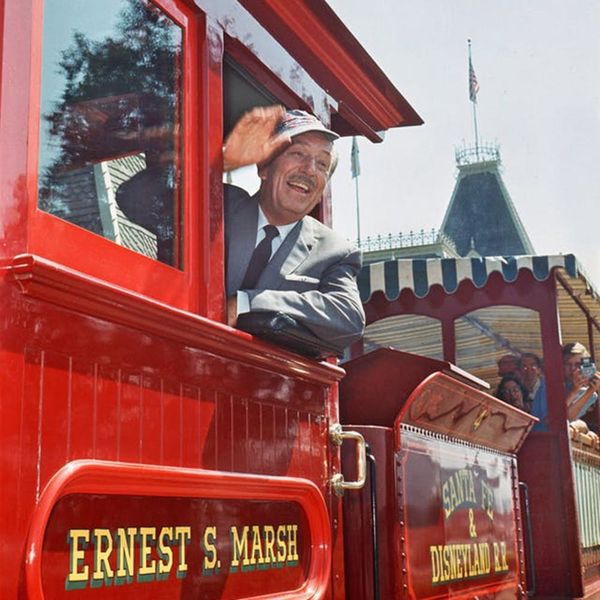 When Disneyland — AKA the happiest place in the whole wide world — opened way back on July 17, 1955, there were a limited number of attractions to enjoy. There were no epic thrill rides, no pirates or ghosts, and no mountain rides; but there was a ton of old-timey charm. While many a ride has been dismantled (bye bye Flying Saucers, Skyway, and Adventures in Inner Space), there are lots of OG attractions you can still visit. Next time you head to Disneyland, wear your best '50s duds and hit these 11 old-school rides.
Take a ride on the Disneyland Railroad. Walt Disney had a thing for trains. Not only did he have a miniature railroad in the backyard of his Holmby Hills home, but he also was very involved with the creation of the Disneyland Railroad, which features beautiful vintage steam engines. Tip: If you haven’t been on the Railroad in a while, it's worth a visit; the classic attraction recently got a makeover with a new trestle bridge, waterfalls, and animatronics. (Photo via Disney Parks)
Say hi to Jingles on the King Arthur Carousel. As legend has it, Walt Disney was inspired to create Disneyland while watching his girls ride on the Griffith Park Merry-Go-Round. He realized the world needed an amusement park that would appeal to kids and adults. Of course, Disneyland would need to have a merry-go-round of its own, and the King Arthur Carousel is a perfect throwback attraction. Hint: Grab a ride on Walt Disney’s favorite horse, Jingles, which is painted in tribute to Mary Poppins. (Photo via Sunny Chanel)
Get your giggles on the Jungle Cruise. When the leisurely ride first opened, it was based on Disney’s True-Life Adventure series and had a far more serious and educational tone. But in the mid-1960s, they opted to lighten it up with visual gags and a hilariously corny script delivered by deadpan skippers. (Photo via Sunny Chanel)
Take in a flick at the Main Street Cinema. While this isn’t really a ride, it’s still a worthwhile trip. This itsy-bitsy SRO theater features a selection of super early Disney shorts, like Plane Crazy, The Dognapper, and the iconic Steamboat Willie. Best of all, the mini-movie palace is air conditioned, so it’s a great place to go to escape that hot Anaheim weather. (Photo via Sunny Chanel)
Hone your driving skills on Autopia. So many can claim a spin around Autopia as their first time behind the wheel, and thankfully for Disney fans young and old, this is a way safer option than the real world for novice drivers. The ride went through a minor revamp in 2016 with new color schemes, some minor car modifications, and the introduction of a new sponsor — Honda. (Photo via Sunny Chanel)
Be charmed by the Storybook Land Canal Boats.If you’re looking for quaint and old-fashioned, the Storybook Land Canal Boats are THE place to be. As you wind around various bends, you’ll see a variety of carefully manicured mini trees and a collection of tiny dwellings based on iconic Disney films like Snow White and The Little Mermaid. (Photo via Sunny Chanel)
Get spooked on Mr. Toad's Wild Ride. It’s not that Mr. Toad’s Wild Ride is spooky per say, but the "you might end up in hell" message could be jarring for kids (and adults). Nevertheless, the ride is still legendary and worth the journey to the "the other side." (Photo via Sunny Chanel)
Stand in the long line for Peter Pan's Flight. Everyone loooves Peter Pan’s Flight. How do we know this? Because they have no qualms about standing in line for upwards of 45 minutes to soar with Peter, Wendy, and the gang. A Fast Pass for this ride is not an option, but we think it's safe to say it's worth the wait. (Photo via Sunny Chanel)
Walk right onto Snow White's Scary Adventures. While Peter Pan’s Flight is, um, blessed with long wait times, you can generally walk right onto Snow White’s Scary Adventure. The dark ride is creepy and charming at the same time. It totally makes sense that Disneyland opened with a ride based on Snow White , since that was Walt Disney’s first foray into feature-length animation. (Photo via Sunny Chanel)
Try not to get too dizzy at the Mad Tea Party. It’s a party, and everyone (well, those with a ticket) is invited! The colorful and classic Alice in Wonderland attraction has been spinning visitors for decades. If you suffer from motion sickness, you can still get your 'gram-able moment in a teacup outside the ride, right by the entrance to The Mad Hatter shop. (Photo via Sunny Chanel)
Cruise on the Mark Twain Riverboat.There’s nothing more relaxing than a leisurely cruise. This majestic, steam-powered paddle boat offers a truly magical journey, taking passengers by a rustic cabin, various forms of faux wildlife, and Tom Sawyer’s Island. (Photo via Sunny Chanel)

Have you been on any of these original rides? Tell us which one is your favorite at @BritandCo!

Sunny Chanel
Sunny Chanel is a freelance writer as well as the founder of the whimsical site Wonder and Company. When this proud San Franciscan isn't writing, working on her fixer-upper or doing crafts, she is playing dress up with daughter and planning her next trip to Disneyland.
Disney
Travel
Disney