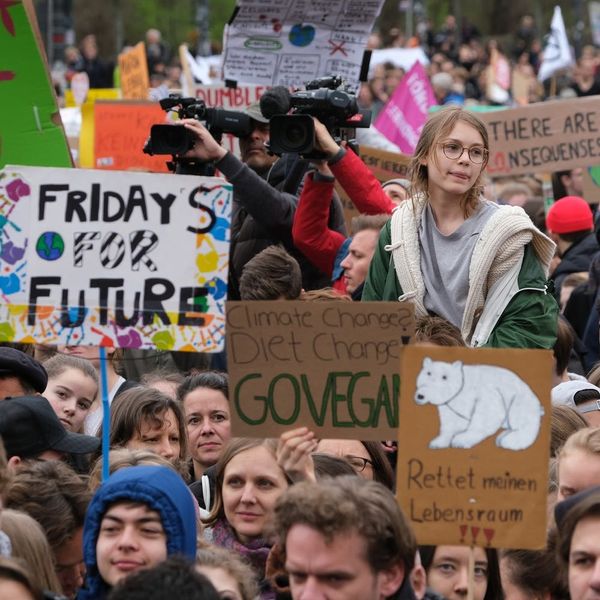 Thanks to a terrifying report from United Nations scientists last fall, climate change has been on people’s minds more than ever. The report gave a 12-year deadline to cut carbon emissions in half in order to prevent a disastrous temperature increase that would lead to rising sea levels, droughts, floods, and a scary escalation in extreme weather events.

Even more recently, young climate change activists like 16-year-olds Greta Thunberg and Isha Clarke are getting the media’s attention by speaking up for their generation and the impact that climate change will have on them. On March 15, what began in 2018 as a one-person protest by Thunberg in her home country of Sweden grew into rally of 1.5 million kids from across the world, working to challenge their respective governments’ failure to act on climate change.

“The politics that’s needed to prevent the climate catastrophe — it doesn’t exist today. We need to change the system, as if we were in crisis, as if there were a war going on,” Thunberg told The New Yorker back in 2018. She’s right. Conversations about women’s empowerment need to change too, by putting the environment out front as one of the movement’s most critical causes — maybe even the most important.

As the effects of climate change continue to spread, it’s the people at the bottom who will feel them first and hardest — in fact, they already have. Historically, that’s been women and children, people of color, Indigenous populations, and other marginalized groups. It’s impossible to separate the exploitation of land from the exploitation of the people who live on it. Feminists: are we down with exploitation? No, we are most certainly not.

Here in the US, we’re among the worst contributors to global warming and one of the countries that will be the least impacted by it (at first, anyway), making it easier to try to ignore the problem for a little while longer. Equatorial countries and poorer countries will suffer first.

Women, who make up 70 percent of the world’s poor, will face a lack of access to proper nutrition, to sexual and maternal health resources, and to protection from violence. Their educational opportunities will be curtailed by a need for them to spend all their time trying to gather scarce resources for their families like water and food. This is where environmentalism becomes an explicit women’s rights issue — but it doesn’t end there.

Research indicates that, even here at home, hurricanes have been increasing in strength thanks to rising ocean temperatures. When Hurricane Katrina struck in 2005, 83 percent of low-income single mothers found themselves without housing, according to data from Oxfam America.

Climate change should also be a big concern for millennial women thinking about starting a family, too, and the very real fear about what kind of world a child born today will inherit. To be blunt, the pro-choice movement is only relevant if there’s still a choice to be made.

“We are not just protesting to let them see that we care,” says Thunberg, “we are protesting until they do something.” Feminists: let’s follow her lead.

RELATED: Teen Girls Are Leading a Wave of Climate Activism in Europe and, Now, the US

Corrina Allen
Corrina Allen is a film + television + travel writer from Toronto. Her journalistic goals include a backstage interview with David Byrne, the fictional character she identifies most closely with is John Wick, and her favorite dead person is Vladimir Nabokov. She never, ever Instagrams photos of her food (just her dog).
Activism
Empowerment
Activism Environment Feminism
More From Empowerment