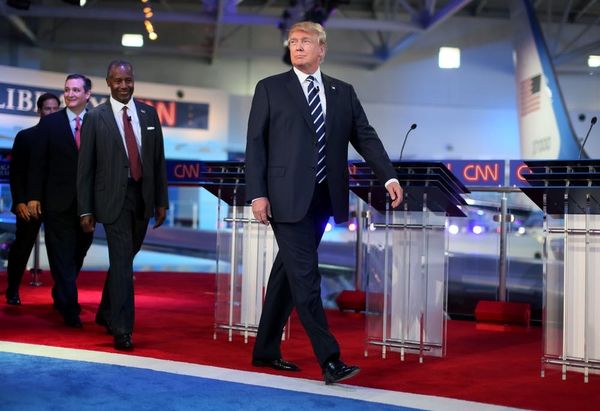 The race for the Presidency is here with one debate under the Republicans’ belts and one more happening right now. Talks about our country’s biggest issues have risen and the candidates are not messing around. With Donald Trump still in the lead for the Republicans, he has already been the center of ALL the attention with no signs of slowing down. If you’re not able to watch the debate tonight, we are here to comfort you while you are away with some of the top tweets from influencers and celebs. Whether you are watching the debate to catch up with the political race or (let’s be real) you and your friends are making a drinking game out of it, let’s see what the Twitterverse had to say. Cheers!

"Thank you, Governor" is the new "Bye, Felicia." #GOPDebate

1. Ellie Hall: This BuzzFeed News Reporter knows what’s up when it comes to this debate. #howlongistoolong

Pizza and the #GOPDebate – doesn't get much better than this! pic.twitter.com/D7RvT23iDi

2. Katie Couric: Katie has the right idea when it comes to watching the debate. Pizza is always a good date. Always.

How hot is it in there?!? Can they pump some air conditioning in there – we got another 2 hours! #GOPDebate

3. Meghan McCain: It’s getting hot in herre, Meghan. We know this is no joke, but, seriously, does CNN not have A/C?!

This debate is surreal. #GOPDebate

4. Kevin McHale: We probably believe Hilary Clinton will be agreeing with you sir. Just second round is just as crazy.

5. BuzzFeed: So does this mean the first round is on him? We will drink to that!

6. Kaleb Nation: This season is just as intense as the last season of The Walking Dead. Well, maybe sans zombies more teddy bears.

If you play a drinking game where you take a shot every time someone says Trump, you'd be dead by now. #GOPDebate #OraPolitics

7. Jesse Ventura: This is the truth. The struggle is real. But we will keep on drinking. It’s for politics, of course.

8. Matt Oswalt: Maybe we need to bring in Jimmy and Justin.

9. The Onion: The Onion knows how to joke. But in all seriousness, who runs the world? GIRLS!

Just dangle this piñata from the big toy plane and let these kids go at it! #GOPDebate #itsfullofbolognameat pic.twitter.com/FdsLSSA43h

10. Olivia Wilde: When the candidates won’t stop arguing with each other, you have to bring the big guns in. Olivia Wilde knows how to play with these kids, obviously.

Raven Ishak
Raven is a Florida native who recently moved to New York City to pursue her dreams. You will always find her taking an unhealthy amount of photos for her Instagram, obsessively tracking the latest coffee shops and restaurants, and watching movies with her boyfriend.
Party