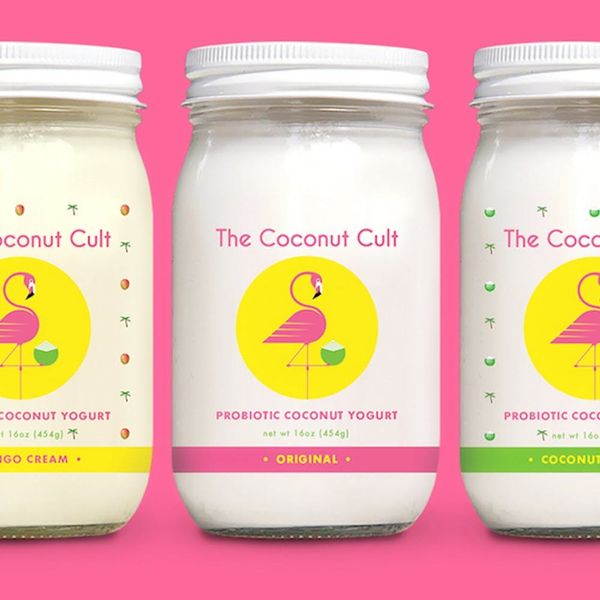 Adorned with a bright pink flamingo and boasting 25 billion probiotics per serving (yes, that’s billion with a “b”), Coconut Cult yogurt jars have been popping up in the feeds and stories of every health and wellness ‘grammer I follow on Instagram. Bloggers were dolloping it atop their smoothie bowls, scooping it onto frozen yogurt, smearing it over protein bars and even squares of chocolate. It looked thick, creamy, and heavenly. I was intrigued, yes, but what I really couldn’t wrap my head around was the $25 price tag. Could 16 ounces of co-yo really be worth the hype and the hefty cost? Not one to miss out, I had to see for myself.

My four jars arrived to my front door neatly packed in a cooler and bedecked in packaging, alerting me of my new “cult member” status. Admittedly, the neon yellow and pink labels were super appealing, and I felt cooler just opening the box. I cracked open a jar of the original flavor, grabbed a spoon, and dove in. I’m not exactly sure what I expected, but it’s not what I tasted. I felt as though my entire body puckered at its sourness. The brand warns consumers that all of the live cultures make for a tangy treat, but this tasted downright effervescent. Could it have gone bad in transit? I read through the enclosed sheet of “Frequently Asked Questions” and decided that no, this was normal. Skeptical, I opened one of the cream flavors and took another bite. Again, I was hit with the sour sensation and quickly swallowed. Because of the crazy probiotic content (FYI the National Yogurt Association says yogurt must contain 100 million cultures per gram), Coconut Cult recommends starting with just a spoonful each day and working your body and tastebuds up from there. I couldn’t have been more thankful.

Each day for the first week, I dutifully stuck to my couple spoonfuls. Some people report immediate effects like tummy trouble or, ahem, “active” bowels. I didn’t see any of those changes, but I did find that over time the taste became more familiar and even pleasantly tangy. I started adding it to the top of my morning smoothie to temper the sourness a little, and it was pretty enjoyable.

Being pregnant and suffering from nasty morning sickness, it had been months since I had been able to follow a typical healthy diet. I was sluggish and bloated. After a couple weeks of eating the yogurt daily, I started to notice some differences. Though I still had my predictable bouts of morning sickness, I felt less queasy and bloated in between. I was going to the bathroom more regularly. One day, I realized the headaches I often woke up with in the morning were gone. It was hard to put my finger on what, but I just felt different. Could it be the yogurt?

After three weeks of eating the yogurt and making no other dietary changes, I feel confident that adding a probiotic to my routine is making a difference. A pretty big one. At $1.50 or so per ounce, I can’t really justify buying Coconut Cult as a luxury snack. However, looking at it as a super powerful supplement, it makes more sense. When comparing serving to serving, many of the top dried probiotics are just as expensive. I like that Coconut Cult is made from whole ingredients and contains no fillers, preservatives, or sugar. When stacked up against other “super” yogurts, it also has more active probiotics. I can’t deny that it’s made me feel better, especially at a time when I’ve been feeling pretty crummy in the gut department. Bottom line — I won’t be budgeting in regular Coconut Cult breakfast bowls, but if you’re considering a probiotic supplement, this yogurt is the way to go.

Jessica Smith
Jessica is a blogger and professional pastry cook in San Francisco. When not whipping up desserts, you can usually find her tackling DIY projects with her husband, entertaining for a crowd, or running around the neighborhood with her rambunctious puppy, Rebel. Jessica believes in using seasonal and wholesome ingredients as much as possible and you can check out more of her recipes at her blog: By Guess And By Golly.
First Bite
Healthy Eating
First Bite Grocery Shopping Healthy Essentials Healthy Living
The Conversation
Reviews:
More From Healthy Eating