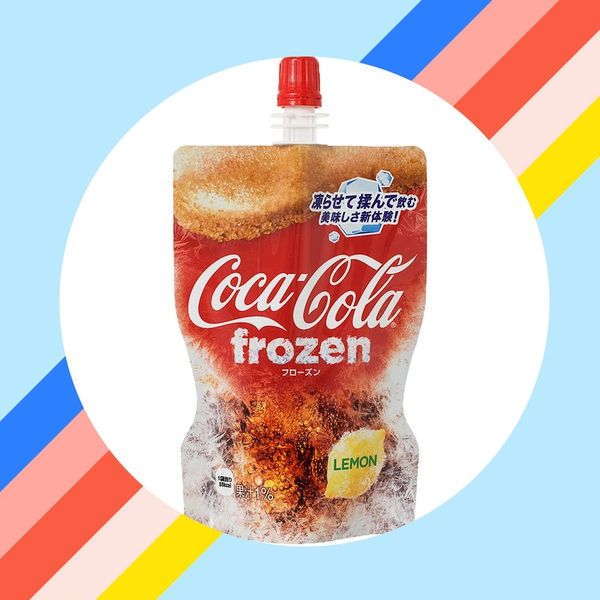 Thanks to the overseas branch of the brand, Coca-Cola now exists — are you ready for this!? — in a frozen pouch that’s been dubbed Coca-Cola Frozen Lemon. Coca-Cola products have been undergoing some major changes in the past year, with added fiber in the original flavor and four new Diet Coke options to enjoy. The latest twist Coca-Cola Japan just released may be the company’s most mouth-watering innovation yet.

And that’s not all! Rather than simply putting the same Coke slushie flavor you can nab at 7-Eleven into a Capri Sun-like packet, this new version, eight years in the making, has hints of lemon. More than 100 different prototypes were reportedly tested before getting the texture, described as “creamy [and] sherbet-like” in the press release, just right.

While there’s no word about whether or not these little delights will be making its way stateside anytime soon, we’ve got a sneaking suspicion that even in the Japanese market, where thousands of new beverages are reportedly released by the company each year, this refreshing treat will be a big enough hit to at least give us hope. Fingers crossed!

Are you salivating over the Coca-Cola pouches? Tell us over @BritandCo.

Nicole Briese
Nicole is the weekend editor for Brit + Co who loves bringing you all the latest buzz. When she's not busy typing away into the wee hours, you can usually find her canoodling with her fur babies, rooting around in a bookstore, or rocking out at a concert of some sort (Guns N' Roses forever!). Check out all her latest musings and past work at nicolebjean.com.
Drink
Food News
Drink
The Conversation
More From Food News