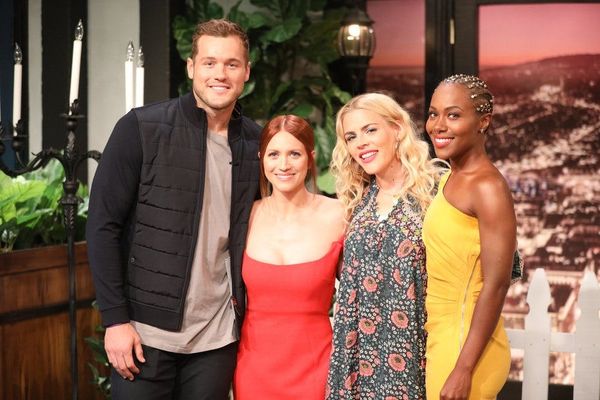 While we’re getting ready for season 15 of The Bachelorette, season 23 Bachelor Colton Underwood is still making the rounds to talk about his own quest for love. Most recently, on Wednesday, April 17, he visited Busy Tonight, where he reenacted his infamous fence jump.

In case you need a refresher: Toward the end of Underwood’s emotional season of The Bachelor, his front-runner, Cassie Randolph, decided to leave the show. This prompted a meltdown from Underwood, who proceeded to leap over a six-foot fence and disappear into the Portuguese countryside in the middle of the pitch-black night.

It was easily the most talked-about moment of the season.

Cut to Wednesday’s episode of Busy Tonight, when host Busy Philipps welcomed Someone Great costars DeWanda Wise and Brittany Snow, the latter of whom is a big Bachelor fan. In honor of Snow’s appearance, Philipps added some special Bachelor-esque touches — like a mini inflatable “hot tub,” a toy helicopter, and a table full of roses — to her set.

Philipps then explained that they were going to make Snow’s “tweet dreams” come true. The tweet in question was from 2013, when the actress joked, “In my next life, I’m coming back as Chris Harrison. #ThisIstheFinalRose #YesChrisWeAreAware #TheMan.”

Philipps even got Harrison himself to record a message for Snow. “Hey Brittany! It’s Chris Harrison from The Bachelor and Bachelorette,” he said, according to E! News. “Let me give you a few tips: First of all, gotta talk with your hands. If you’re not using your hands, you’re not saying anything at all. Second, always, always have a hot tub or helicopter within a thousand feet. And last, but certainly not least, always wear comfortable shoes, because you never know when someone’s gonna jump over a fence and make a break for it.”

Enter: Colton Underwood! The season 15 star surprised Snow for a special role-playing scenario, where Snow had to give the Bachelor a pep talk before his final rose ceremony. “Colton. This is the most dramatic season of The Bachelor,” she began. “You need to make sure that both of these women are here for the right reasons, and that you have taken this journey together. Make sure you both have a connection, because this is… the final rose tonight. When you’re ready.”

Underwood told her he was very happy with Cassie Randolph, so rather than hand out any roses, he decided to make a quick exit — by jumping over the white picket fence that Philipps had set up for the occasion.

Watch the clip above!