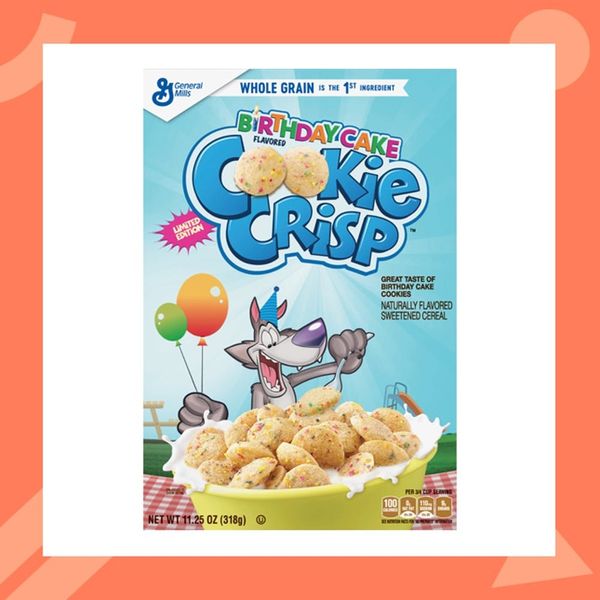 Get ready to blow out the candles, cookie fiends! Hot on the heels of birthday cake croissants and Krispy Kreme’s birthday cake donuts comes the latest sprinkle-studded cake-flavored breakfast: Cookie Crisp cereal. According to Cerealously, General Mills will be releasing a limited-edition birthday version of the beloved cookie cereal. There aren’t many details just yet, but it seems boxes should be hitting shelves soon. Get out those party hats and keep your eyes peeled in the coming days and weeks.

Cookie Crisp has largely remained the same flavor over the decades, though they have had fun holiday upgrades in the past. From the Holiday Sprinkles Cookie Crisp of 2014 and the Peanut Butter Cookie Crisp of 2005, the cereal has mostly stayed true to its chocolate chippy goodness. They did release a Cookie Crisp Sprinkles edition in 2009, which looks eerily similar to the new birthday cake version we’re about to see in stores. We’ve reached out to General Mills for more info. Stay tuned!

Are you excited to try Cookie Crisp Birthday Cake? Let us know @BritandCo!

Arielle Tschinkel
Arielle Tschinkel is a pop culture junkie who went to NYU because the Olsen twins went to NYU (really). She is a freelance writer whose work has also been featured on HelloGiggles, Refinery29, SheKnows, Bustle, Hollywood.com, and many others; and she's living her dream one Britney Spears GIF at a time. Follow her on Twitter @mrstschinkel or visit her website at arielletschinkel.com.
Grocery Shopping
Food News
Grocery Shopping New Food Alert Shopping
The Conversation