Birthday Cake Croissants Are the Stuff of Our Unicorn Dreams 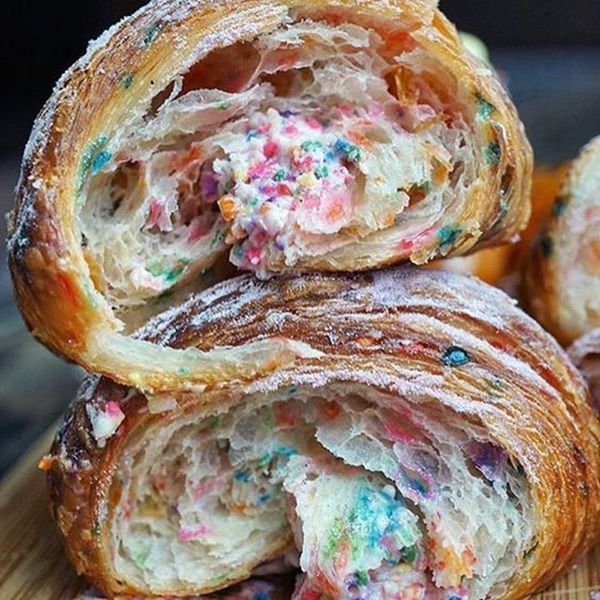 We’ve been crushing on bagel art and rainbow desserts like mad, but a new player has taken the stage — the birthday cake croissant. With funfetti everything on the rise, it was only a matter of time before it reached our favorite breakfast pastry. Sprinkles are mixed into the pastry dough, which is then rolled around a mascarpone filling. It’s definitely the next blockbuster breakfast confection, so get in line now if you want to get your hands on one.

Pastry chef Thiago Silva is known for his genius dessert hybrids, including a cinnamon roll-stuffed donut and s’mores pizza. He’s no stranger to unique pastries, and his birthday cake croissants are taking Instagram by storm.

He’s also recently added a cookies ‘n’ cream croissant to the lineup. The dough is mixed with cookie crumbles and coated with a house-made Oreo butter, then topped with what can only be described as absolute heaven (AKA more Oreo butter).

Get your croissant fix at Thiago’s Bakery inside NYC’s Union Fare, where you can also sample his other croissant mashups, including red velvet with cream cheese custard, green tea with green tea mascarpone and a PB&J-inspired version with jelly enrobed in peanut butter dough.

Has the reign of rainbow foods been overthrown by the rise of funfetti? Let us know @BritandCo!

Sarah James
With an MFA in Costume Design and a website dedicated to sous vide cooking, Sarah's been in the DIY space since long before it was cool. She was the Food + Living editor for Instructables.com where she produced three books including How to Do Absolutely Everything, and the Think Tank director at Betabrand where she designed the bestselling Dress Pant Yoga Pants. Sarah also worked as a make-up artist for Blue Man Group and has built costumes for film, theater and dance.
Breakfast Recipes
Celebrity News
Breakfast Recipes Brunch Recipes Foodie
More From Celebrity News