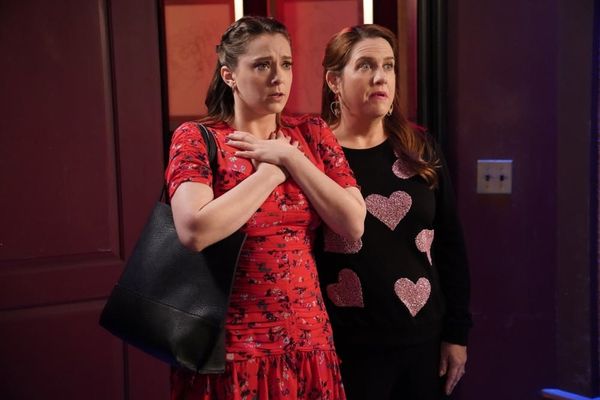 Crazy Ex-Girlfriend is set to end its fourth and final season tonight, April 5, and series star Rachel Bloom, who co-created the show with Aline Brosh McKenna, is feeling (understandably) sentimental. Ahead of the finale, she took to Instagram to pay loving tribute to the show and its characters, including her very own alter ego, Rebecca Bunch.

“One day, a girl named Rebecca Bunch was working hard at a New York job when some writers dropped in from the sky and forced her to make some drastic decisions for the sake of a TV show,” Bloom captioned a photo of the series’ protagonist. “Tonight, you’ll see those writers leave her life. I love you, Becks. I’m sorry that we writers put you through hell, but I hope we left you in a better place than when we found you.”

In another Instagram post, Bloom gave a special shout-out to her creative partner, McKenna, as she looked back at their journey since the show’s premiere in 2015.

“Tomorrow night, you will see the culmination of the conversation that @abmck and I have been having for almost 6 years,” she wrote. “The last sentence of #crazyexgirlfriend is the same last sentence that we had in the original pilot pitch. Of course, so much has changed from that original pitch to the final product, but the fact that we’ve actually gotten to finish our thought in the way we wanted to and had the opportunity to stay true to our vision without being canceled blows my mind. I’m still not convinced that this whole thing hasn’t been some sort of elaborate social experiment or ‘Shutter Island’ style simulation.”

She went on to thank the CW, “for believing in us,” and “everyone who has watched and will continue to watch Crazy Ex-Girlfriend.”

Crazy Ex-Girlfriend followed Rebecca as she left her job as an NYC lawyer to follow her childhood crush to what she thought would be a simpler life across the country in West Covina, California. The show occupied a singular spot on television during its run, blending an ambitious musical approach with a funny feminist angle. It was also lauded for its honest depictions and discussions of mental health struggles.

Following tonight’s finale, the CW will air Yes, It’s Really Us Singing: The Crazy Ex-Girlfriend Concert Special, which the cast filmed in March. The fun begins at 8pm ET.