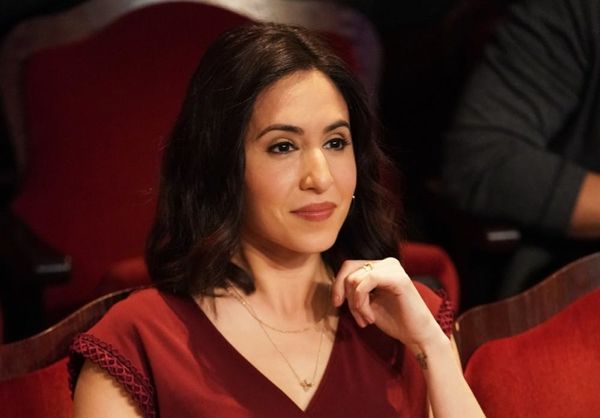 As Crazy Ex-Girlfriend nears the end of its fourth and final season — after tonight, there are only three episodes left — fans aren’t the only ones feeling sentimental. Gabrielle Ruiz, who plays Valencia Perez on the musical series, recently reminisced with us about the show’s four-year run, sharing her own personal experience with it both on-screen and off.

“Valencia was such a gift,” Ruiz tells Brit + Co of her character, who began as a rival for Rebecca Bunch but has since become one of her closest friends, and one of the show’s most valuable players. “It was such a treat to be able to breathe life into the words that were written for her.”

Ruiz’s journey with Crazy Ex-Girlfriend began all the way back in season 1. When she booked the show — with a little help from YouTube (more on that in a minute) — she was only slated to appear in a couple of episodes. But she got along so well with co-creators Rachel Bloom and Aline Brosh McKenna that two episodes became an entire season, and then “guest star” became “series regular.” She was promoted in 2016, ahead of season 2.

“We just kept having such good banter on and off-screen. I feel like that had a lot to do with, you know, Valencia not getting killed off the island,” she quips.

Her talent probably had something to do with it, too. Ruiz first auditioned for the role via self-tape, and then met Bloom and McKenna over Skype to discuss the character. After they gave her a couple of notes, they told her to send in a second tape for her callback. When she asked if they wanted her to sing again, Bloom said, “Oh, we’ve been stalking you on YouTube. You can sing.”

Ruiz says that’s when she knew they were going to get along. “I thought: 1) I like this girl; 2) we’re going to have a really good time; and 3) thank god all that shameless self-promoting finally made sense.”

Her affection for Bloom and McKenna has only grown since then. And so has her affection for Valencia, who was initially a bit of a mean girl. “Aline and Rachel both were so complimentary, so I was really able to create some depth in this character that was extremely stereotypical in season 1,” she tells us.

Indeed, Valencia has come a long way since she was introduced as Josh’s girlfriend in the series’ second episode. While at first she didn’t get along with other women, she’s now a core member of Rebecca’s inner circle, which also includes Paula (Donna Lynne Champlin) and Heather (Vella Lovell). Not only that, but she has her own party-planning business, which she runs with her girlfriend, Beth.

Her “arc” already feels the most complete, but Ruiz promises there’s still more to come. She describes the April 5 series finale as kind of a “reality check for everyone” and says it’ll continue Crazy Ex-Girlfriend‘s specific brand of nuanced storytelling. “Valencia doesn’t have a lot of words in the final episode, so I was able to watch a lot of the table read,” she explains. “And I was blown away. I was absolutely blown away with the story that Aline and Rachel pitched five, six years ago. Even what you do expect, you don’t.”

When it came time to actually shoot the episode, McKenna stepped behind the camera to direct, which made those last days on set extra-special. “It was truly wonderful,” Ruiz recalls, noting that she and the cast loved watching Bloom and McKenna work together to bring the show full-circle. “Everybody was able to be there and experience the final moment of the final scene, the final second of shooting, and we all felt very satisfied. You don’t get that often, and I think we all knew what we had.”

Ruiz says that final day was emotional, but in a good way. It helped, too, that it wasn’t really the end — as the CW announced in February, the series finale will be followed by a Crazy Ex-Girlfriend concert special, which the cast is shooting this month. “[The last day of filming] was kind of like a soft-wrap,” she says. “Like, ‘I guess I’m going to cry, but I’ll see you in a month!'”

And in the meantime, they’re all staying connected via group text. “Let me tell you, that the group text is strong,” Ruiz tells us. “It’s like it never ended. I don’t think it ever will.”

It’s that sense of camaraderie that Ruiz really treasures after four seasons. Well, that and basically everything else about her experience with the show. “The right role is always meant for you. And you just gotta survive in this business to remember that. And when you are reminded of that, the universe’s plans are so much more fun than yours,” she says. “That’s what I learned with Crazy Ex-Girlfriend. Rachel Bloom is now one of my best friends for life. Donna Lynne Champlin and I — I went to Medieval Times with her and her family. The relationships and the introduction to Hollywood could not have been better. It’s a little gold mine at the end of the rainbow. They actually do exist in this business.”

She hopes to find another one sometime soon. “I feel like the wind in my sails is not only musical but magical,” she says. “I’m trying to enjoy the ride and not look down.”