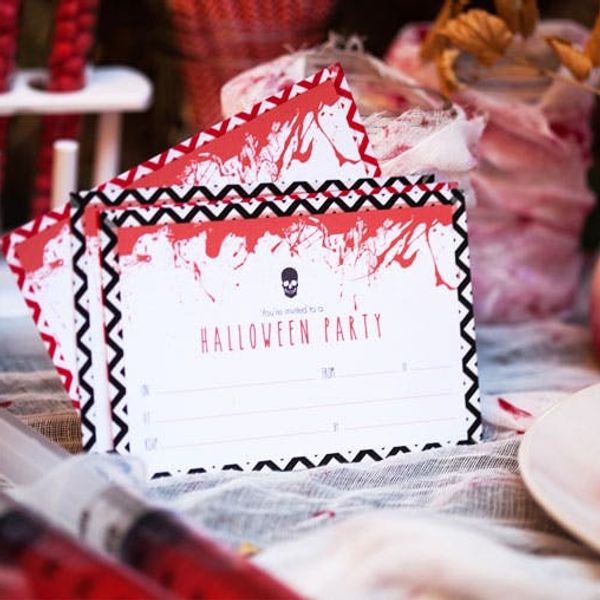 Ready to get creepy? To close out our Creepy Halloween week, we obviously had to throw a Creepy Halloween Party! From painful-looking petit fours to blood-splattered table decor, it’s time to get your creep on.

1. Creepy Invitations: As usual, invites are first on our list of must-makes. Like previous party invites, you simply print these up and decorate them as you like using washi tape.

2. Blood-Splattered Runner: To really set the scene, you need a pretty gruesome runner. We said it before, and we’ll say it again: Dexter called. He wants his table runner back.

Fill ’em up with any mix you like. We went with fruit punch Gatorade and vodka. Why not get those electrolytes in while you drink?!

4. Blood-Splattered Vases: These bud vases are perfect for dead flowers and twigs.

6. Blood Red Candlesticks: These are just begging to be a prop in a murder mystery party that goes dark.

8. Bloody Bunting Kit: Another party classic turned extra creepy by using gauze and red paint. Bonus points if you get really into the theme and throw in some red fingerprints.

9. Creepy Preserved Insects: Remember that totally weird skeleton man from Tales from the Crypt? He would definitely have a whole bunch of these on a shelf in his living room. We created ours by mixing orange and black food coloring with water and simply dropping plastic insects right in. Take it to the next level by using gummy worms and turn serving them to your guests.

10. Blood-Splattered Votive Jars: Up the creep factor by creating a glowing light scheme with these blood-splattered votives. Who knew mason jars could be anything but cute?

11. Blood-Splattered Petit Fours: These our definitely our favorite creepy creation from this week. They’re almost too scary to eat!

Okay okay, these straws aren’t that creepy. But they definitely add a touch of style to your extra weird scene.

Totally creeped out? Talk to us in the comments below.

Anjelika Temple
As Co-Founder and Chief Creative Officer of Brit + Co, Anjelika Temple brings her voracious consumption of all things creative and colorful to DIY projects, geeky gadgetry finds and more. When she's not DIY-ing her heart out, you'll find her throwing dinner parties with friends or adventuring with her husband David, their daughters Anokhi and Indira, and their silly dog Turkey.
Halloween
Party
Halloween