This Bike Helmet Is More Dapper Than Dorky 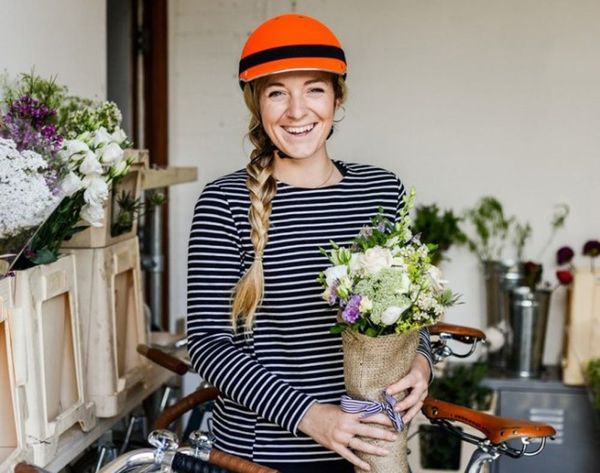 Over the weekend, Solange Knowles tied the knot with her longtime beau, director Alan Ferguson. It was no surprise that the couple, known for their impeccable fashion sense, arrived to their nuptials in style. Instead of a traditional stretch limo, the couple opted to cruise in on vintage bicycles that were painted white. Solange’s bike even sported a beautiful bouquet of flowers in a wire-frame basket.

Noticeably missing from their pictures of bicycle wedded bliss: helmets. And, who would blame them? Helmets aren’t always the most fashionable (or comfortable) accessories. Thankfully, companies including Bandbox and Henry Liz have endeavored to add a splash of style and functionality to help turn bicycle helmets into must-wear accessories. Dappercap, a London-based manufacturer, is the latest startup to try their hand at making helmets more fashionable.

Dappercaps are hand-made helmets constructed from a 90% carbon shell, which means these babies are super lightweight. They’re even made by people who make safety helmets for the coast guard and police. How’s that for protection?

Although the helmets look like the chicer cousin of equestrian helmets, Dappercaps were made for cyclists. We’re not talking about the intensely competitive, spandex-sporting variety. We’re talking about everyday people who either bike for fun or to get from point A to point B on any given day. No fancy body-hugging outfits required.

In fact, Dappercaps are supporters of the Slow Bicycle Movement, a global initiative inspiring people to care less about speed and more about the moment.

Dappercaps currently come in four colors — gray, orange, camel and blue. If you’re thinking, “Hey, none of those colors work with my wardrobe,” don’t fret. If you support the company’s Kickstarter campaign, you can help them add more colors and customizable options like interchangeable bands in multiple colors and patterns.

This all sounds great, right? Okay, there are a few catches: One is that you’re gonna have to wait awhile to actually get your head in a Dappercap if you live outside Europe. The prototype for Dappercaps was tested according to the European Safety Standard for Cycle Helmets, but in order to sell their helmets to people outside of Europe the company has to test and design their helmets to meet the safety standards of other countries. Also, all of the prototypes were made with medium molds, so they have to develop molds for small and large sizes, too. Like Cinderella and her glass slipper, these helmets may not be a perfect fit for everyone… yet.

But let’s get down to brass tacks: How long will it take to get your head in a Dappercap? If you live in Europe, you can get a Dappercap in Spring 2015, but if you live in the US, Australia or New Zealand you may have to wait until later next year.

Although the debate is still open on whether bicycle helmets actually make for safer bicycling, there is no federal law in the U.S. that requires people to wear them. But if you like the idea of extra protection for your noggin and choose to wear a helmet, you might as well wear one that makes you feel stylish and secure at the same time, right?

Feel free to take a look at these super-cool bikes while you wait for your Dappercap.

Are you a fan of bicycle helmets? Do you think they make for safer cycling? Share your thoughts with us in the comments section below.