How Your Bike Helmet Could Look Way Less Dorky 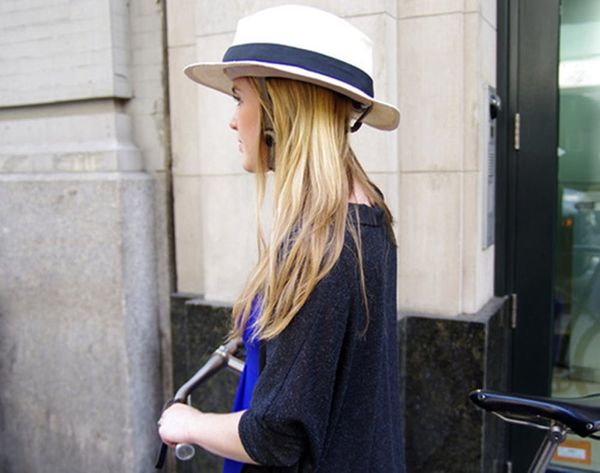 Even though it seems like there is an endless amount of fashion-conscious options for two wheel-ready tote-ables, no one has completely cracked the code for merging style with cycling safety. Let’s face it: No matter if they’re dotted with leopard print or colored in a minty sheen, bike helmets look pretty dorky unless you’re a kitted-up pro rider. That’s why Bandbox started restyling the safety gear for casual cruisers and commuters who want to keep it cute from head to toe clip.

The idea is super cool: Bandbox helmets camouflage its hard shell with an array of different interchangeable hat-inspired covers. Even the straps are designed to blend in with common hair shades to make it look like you’ve just tossed on your fave fair weather fedora when your dome is buckled in.

Founded by bike safety expert and former Jersey City Director of Transportation Dr. Cheryl Allen-Munley, Bandbox helmets aim to work as an extension of your wardrobe rather than cramp your pavement pounding style. Part of that is due to its slightly smaller shell design, which reduces the bulk of traditional bike helmets by a whole two inches so it can rest closer to your noggin. But they don’t skimp on comfort: Each vented thermoplastic headpiece is padded with wickable fabric and assembled according to US CPSC standards by Allen-Munley and her husband in their New Jersey basement. Allen-Munley shapes and sews each hat-like cover too, from beachy fedora toppers to wool ascot caps. When placed on top of the shell, the helmet-hat hybrids lay so naturally that it’s tricky to spot the sporty secret hiding under that floppy brim.

We’re cheering for the cycling startup to be the next big thing. And we think Bandbox totally can be with a little help from designers who can translate their concept into something covetable to a trendier crowd. Imagine if brands like Kate Spade or Shourouk branched out into bike wear for a limited edition line of perky/probably super sparkly cap-inspired helmet covers (we’d shell out the big bucks!), or even if Carhart released a line of shell-ready beanies — that would be a game changer for winter road warriors. While we hope for a high-fashion collab, you can snag a Bandbox helmet online for $60 and pick up the interchangeable cover to suit your style for $44.

Would you wear a Bandbox over your traditional bike helmet? What other cycling innovations have caught your eye? Tell us in the comments below.