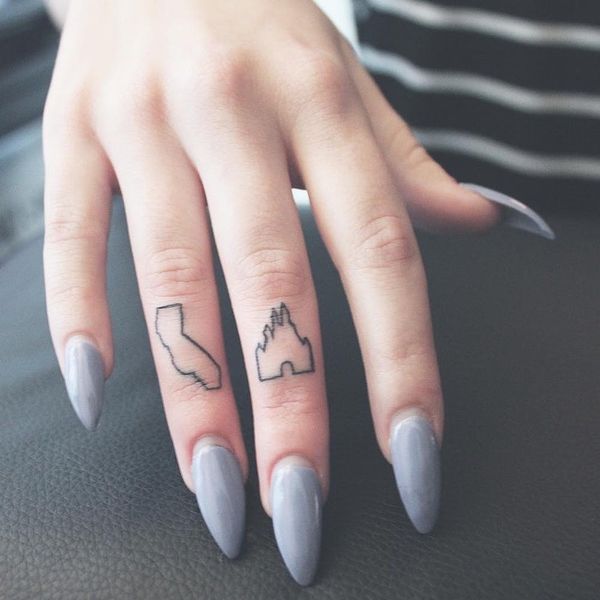 The wonderful world of Disney played a huge role in a lot of our childhoods. For many, it introduced us to magic and, of course, true love. We wanted to dance into the night like Cinderella and Belle, swim under the sea with Ariel and party ’til the break of dawn with the cast of Aristocats. And while you may have outgrown your dreams of getting married in Disneyland, you can still channel a bit of nostalgia with some adorable finger tattoos. Scroll down for nine colorful, cartoon-inspired tats.

1. Toy Story: The meaning behind your ink doesn’t have to be over-the-top obvious. These Toy Story tattoos are subtle, minimalist and still playful. To infinity and beyond! (Photo via Create Tattoos)

2. Bambi: Finger portraiture has been a growing tat trend ever since Cara Delevingne revealed her little lion. This one features a colorful image of the main character of Walt’s favorite film, Bambi.

3. Mickey and Minnie: What’s cuter than the iconic outline of two of Disney’s most well-known characters? This matching Mickey and Minnie ink is a perfect way to shine together and apart. Couples’ tats #goals!

4. The Lion King: Tattoos can be extremely personal things, and sometimes you just wanna keep a little something to yourself. This “hakuna matata” from The Lion King is rendered in Swahili, so only you and the rest of the hardcore fans know the true meaning. (Photo via Melvina O)

6. The Little Mermaid: This was the summer of all things mermaid, and there is no mermaid more famous than our beloved Ariel. This shell is a simple reminder of a film that took us under the sea and back again. (Photo via Tattoologist)

7. Frozen: What’s better: Brave or Frozen? While this trail of snowflakes won’t settle the ongoing debate, it will let other Disneyphiles know where you stand when it comes to that argument. (Photo via Godfather Style)

8. Cinderella’s Castle: Show your love for the happiest place on Earth (Disneyland, duh!) with a silhouette of Cinderella’s castle. All that’s missing is Tinkerbell zipping above amongst a sky of fireworks.

And some Tinkerbell fingertips to go along with the arm piece😊

9. Peter Pan: Okay, this one is henna, not ink, BUT it’s still a great design. Who can resist a sprinkle of stars across their fingers thanks to Tinkerbell’s magical fairy dust? While you won’t take flight like Wendy and the boys, it’ll inspire some pretty fanciful dreams. Faith, Trust and Pixie Dust, ladies.

Looking for more adorable tattoo inspo? Visit us on Pinterest!

Septembre Anderson
Septembre Anderson is a multimedia journalist, cultural critic and media commentator. Her published work covers topic areas like fashion, beauty, lifestyle, current events, social justice and health + wellness. While her passions are her profession, Septembre also enjoys losing herself in science fiction and fantasy novels and waiting patiently for the next A Song of Ice and Fire book.
Disney
Tattoos
Disney Tattoos