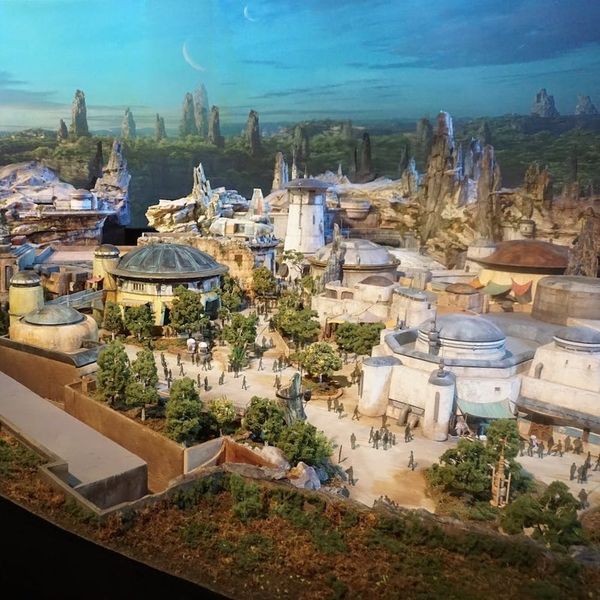 Oh, Disney, why oh why must you tease us this way. During the EPIC D23 Expo — the biennial convention for Disney devotees — Disney Parks and Resorts held a jam-packed session for 7,000 of their most loyal fans. The head honchos of the happiest places on Earth dropped so many developments, grand plans, and jaw-dropping announcements that attendees left in a daze with dreams of what is to come. The plans range from a Mickey Mouse ride to a Star Wars hotel (srsly something for everyone). Here are some of the biggest, best, and most anticipated developments coming to Disneyland and Disney World.

We now have a name for what we’ve all been calling Star Wars land — Star Wars: Galaxy’s Edge. The highly anticipated new section of the park — 14 acres behind Frontierland and Critter Country — debuted in model form during D23, providing us with the first tangible look at the land. Star Wars: Galaxy’s Edge will include a battle between the First Order and the Resistance on a Star Destroyer, a chance to fly the Millennium Falcon, and a totally immersive experience that sucks guests right into the story. Guests will have the chance to interact with beloved characters like BB-8, Chewbacca, Kylo Ren, and Rex (who happens to be the DJ at the local cantina). They also announced that the Star Wars land in Anaheim will open before the one in Orlando; sorry Florida, you’re going to have to wait. (Photo via Sunny Chanel)

Like getting a Star Wars land wasn’t enough. Disney will embark on their most experimental and unique project EVER with their Star Wars hotel located in Walt Disney World. This will be a 100 percent immersive luxury resort experience where guests are given a narrative to play along with when they check in. Every single detail will be out of this world, including faux windows in all the rooms that appear to look out into space. (Photo via Walt Disney Parks)

Not having a Mickey Mouse ride at a Disney park seems to be like a HUGE omission. His likeness (and DNA) are found everywhere in the park, from the waffle you just scarfed down to the ears that are de rigueur. It’s his house! But that’s going to change. Hollywood Studios at Walt Disney World will be home to

a “2D and a half” experience based on the oh-so stylish shorts shown on the Disney channel, which they say will be a “mouseterpiece.” Plus, there will be more hidden Mickeys than any other ride — so many that it will be near impossible to find them all! (Photo via Walt Disney Parks)

The Ratatouille ride in Paris is one of the most popular attractions in the European park and a reason why many Disney fans take a side trip from the City of Lights to experience it. But soon(ish), a passport won’t be required to hang out with Remy and the gang. The Ratatouille ride, where you are shrunk down to the size of a rodent, will be built in an expansion of the French pavilion in the World Showcase at Epcot. (Photo via Walt Disney Parks)

Another attraction that will be imported from overseas is the highly successful Tron Lightcycle Power Run ride. The sci-fi thrill ride debuted at the opening of Shanghai Disney to rave reviews from both seasoned theme park enthusiasts to those new to the genre of amusement parks (which is a new thing in China). It was so successful that Disney figured they should probably bring it to the states so that we all don’t have to trek over to Asia to experience it. The ride will open in Tomorrowland at the Magic Kingdom in Walt Disney World. (Photo via Walt Disney Parks)

In preparation for Walt Disney World’s 50th Anniversary, there will be several enhancements and additions to Epcot, including an e-ticket (which translates to “be ready to stand in line”) Guardians of the Galaxy ride. As for why the Guardians are at Epcot, it’s because Peter Quill AKA Starlord visited the park when he was still living on Earth (and they have the photos to prove it). (Photo via Walt Disney Parks)

7. Pixar will take over the Pier. Pixar lovers have often flocked to the Paradise Pier area in California Adventure to aim for the high score on Toy Story Mania. Soon there will be many other Pixar characters and experiences to lure guests to the southwestern section of the park. While they didn’t give many details, we do know that there will be a major injection of Pixar-ness, as well as (hopefully) a new attraction or two, and we’re LOVIN’ Bing Bong’s Confectionery! (Photo via Walt Disney Parks)

8. Avoid traffic with the Disney Skyliner. If you’ve been to Walt Disney World, then you’re probably well aware of the struggle to transport your crew from one part of the vast San Francisco-sized resort to another. The Sky Way will bypass bus and auto traffic by going over it all via high wire gondolas, and connect various resorts with Disney’s Hollywood Studios and Epcot. Of course, each car will be themed (Haunted Mansion = yes!). (Photo via Walt Disney Parks)

One of the best times to visit Disneyland is during Halloween Time and especially best when going to one of their extravagant Halloween parties — a separate ticketed event which will run from Sept. 15 to Oct. 31. This year will be the first time Cars Land will embrace the Halloween theme, with the characters from Cars dressed up as a super hero, a pirate, and a “van-pire.” (Photo via Walt Disney Parks)

opened recently, many an eagle eye noticed a hatch on the ground branded with the Avengers logo. If they guessed that this was teasing an expansion of the Marvel brand in California Adventure, they’d be right. Imagineers are currently developing a new attraction to add to the growing super hero area in the park. (Photo via Walt Disney Parks)
Sunny Chanel
Sunny Chanel is a freelance writer as well as the founder of the whimsical site Wonder and Company. When this proud San Franciscan isn't writing, working on her fixer-upper or doing crafts, she is playing dress up with daughter and planning her next trip to Disneyland.
Disney
Travel
Disney Halloween