Do Emoji Speak Louder Than Words? 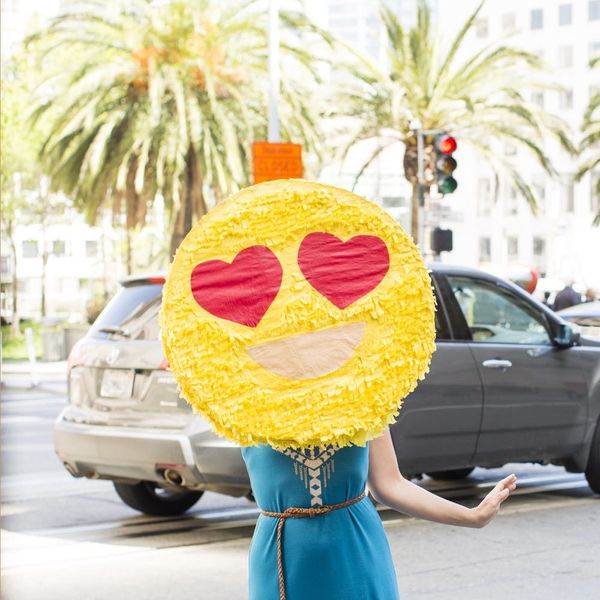 If a picture is worth a thousand words, then what about emoji? The colorful little symbols are so ubiquitous that Oxford Dictionaries deemed the LOL emoji, aka “face with tears of joy,” the 2015 word of the year. Even the White House uses emoji to speak Millennial and reach younger voters. Of course, the images can be silly (hello, poop emoji). But should we roll our eyes at these symbols as over-used tech toys or embrace them as a form of useful and creative shorthand that gets our point across and so much more?

Sure, a strategically placed smiley face can convey sarcasm via text, and a well-timed face with stuck-out tongue and winking eye has the power to diffuse an awkward conversation on Gchat. But Dr. Lauren Collister, a socio-linguist and scholarly communications librarian at University of Pittsburgh, sees emoji being used in increasingly inventive ways.

“Emoji are also a resource for linguistic creativity. We all have our own style of speaking and writing, and what emoji a person uses can be part of their own style. Some people are very creative with emoji, stringing them together to create a kind of visual poetry or storytelling,” Collister adds. If you don’t see the value in this kind of expression, do yourself a favor and explore emojisaurus (we’ll wait).

Emoji are even helping to raise awareness on topics from autism to abuse. At the 2013 Emoji Art Show in Manhattan, Genevieve Belleveau’s performance art piece, Emoji Autism Facial Recognition Therapy, used the humble emoji to reduce the stigma surrounding autism by allowing people to learn more about the disorder and how it works. The artist showed viewers a hypothetical scenario, such as a breakup, and asked them to identify their feelings from a spectrum of emoji, shedding light on how the colorful symbols can be put to meaningful use. And in Sweden, a non-profit organization that operates a national children’s hotline, launched an emoji app to help abused children tell adults about their mistreatment without needing to put it into words, breaking down language barriers and allowing kids to get the support they need. These expressive innovations show us just how powerful the unassuming emoji really is. On the other hand, you can also use an emoji to order pizza.

Are emoji always an appropriate form of communication?

Alexa Meyer, an account executive at Google, says she makes limited use of emoji in the workplace, but admits, “I do use the smiley face occasionally.” When communicating with clients over email, she holds off until they’ve developed a solid working relationship. But with co-workers she finds it can be a great ice-breaker. “I use emoji if I am gChatting with an internal member on my team. It helps to create fast rapport with a coworker, especially in cases when I have not met or spoken with that coworker before,” she added.

For most, the only problem with using emoji comes down to one question: Am I being understood? Suzy Strutner, a New York-based associate editor, explained, “Sometimes I worry that my repeated tongue-sticking-out emoji still won’t be enough to make people realize I’m joking. Other than that, I’ve never run into an emoji issue.”

In some cases, a single emoji can perfectly sum up exactly what you want to say sans words. “I can send the kissy face to say some semblance of “I love you,” when normally I would’ve just said nothing (because “I love you” is hella awkward to say),” Strutner explained. “Of course, this theory doesn’t apply to the taco emoji. Or the unicorn. Unless tacos and unicorns equals feelings. Which they could.”

When in doubt, most fans simply embrace the facetious nature of emoji. Peter Jackson, an Oakland-based program manager, said, “Whenever Chipotle is mentioned in a text conversation, I send the poop emoji. Because… well, obviously. I’m not sure if that answers your question, but that’s what I have to say about that.”

Megan Beauchamp
Megan Beauchamp is currently the lifestyles content manager for eHow where she covers topics from home to style to food. She writes about all things literature on her blog BY THE BOOK, and she writes about books for Bustle. She is living in Los Angeles.
Emoji
Home News
Emoji Tech News
More From Home News