Brace Yourselves: Domino’s Has Just Unveiled a Chocolate Pizza 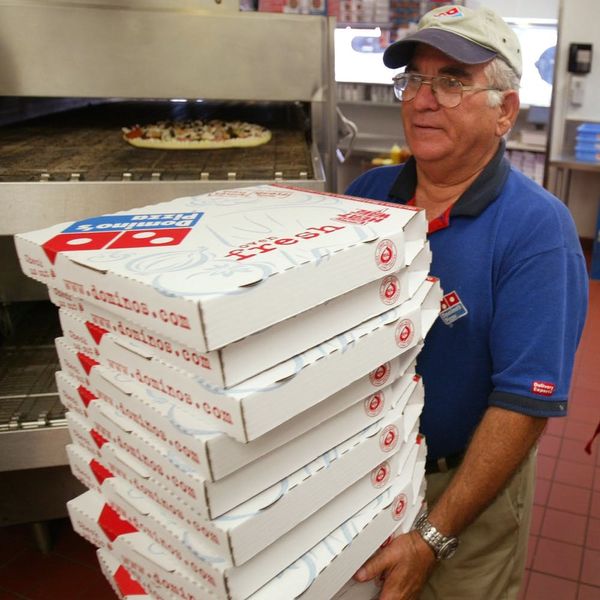 Domino’s is no stranger to a good marketing ploy: The pizza chain did give us that pizza-shaped engagement ring, after all. But its latest innovation has completely blown our minds. Move over, burger pizza, because chocolate pizza has arrived. We repeat: CHOCOLATE pizza has arrived!

Dubbed the Lotta-Chocca Pizza, this sugar-packed dessert pie is basically any chocoholic’s dream come true. There’s so much melted milk chocolatey goodness on a six-inch dough base, it looks like heaven on a plate.

According to those who have already tried it, it tastes like it too: As one girl wrote on Twitter, she’s “never tasted anything like it!!!! BETTER than the cookies by far.” Just check out all these glowing reviews!

Omg we got the @dominos chocolate pizza last night 😍🤤 never tasted anything like it!!!! BETTER than the cookies by far

Anyway, me and Laura got a chocolate pizza from Dominos and it was exquisite pic.twitter.com/LBAA8Vwz7T

Tried the @Dominos_UK chocolate pizza and it was the beat this ever! Everyone should try it Kanye approves as well naturally pic.twitter.com/guQbQ4jAZT

Just had dominos chocolate pizza and I was not disappointed

Unfortunately, there is a pretty big geographical issue at hand, as it seems to only be found on UK menus: The limited-edition masterpiece is currently being served in branches across the country for £5 (or roughly $7) a pop.

For those lucky enough to find it, a spokesperson recommends acting fast, telling Digital Spy, “We’d suggest that people do try it quickly whilst stocks last, though we’d remind our Domino’s super fans that it is a sharing dessert for four, not all for one!”

That sounds like a wise choice, given that it clocks in at 204 calories… per slice. (We’d still do it.)

Would you still try the Lotta-Chocca Pizza? Tweet us @BritandCo.

Barbara Pavone
Barbara Pavone is a pop culture-obsessed writer based in beautiful (but ridiculously cold) Montreal, Canada. When she's not working, she's sipping on a Pimm's Cup and daydreaming about her celebrity hero, Saint West.
Chocolate
Food News
Chocolate Fast Food
The Conversation