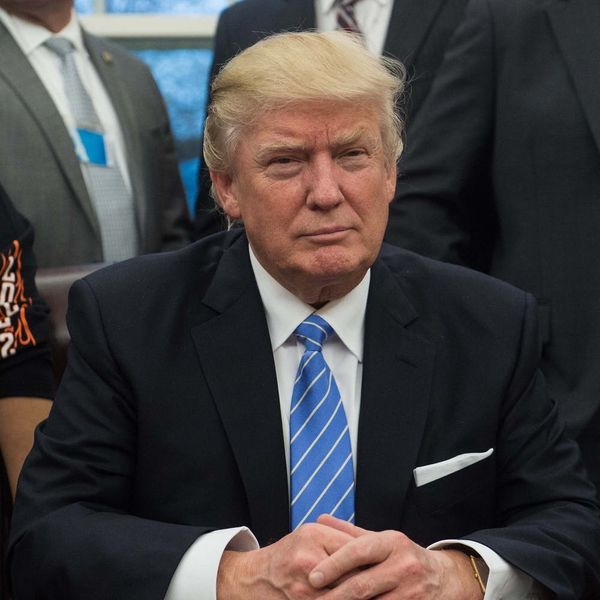 Despite the best efforts of the millions of women and men that marched around the world for women’s rights on Saturday, President Trump (who acknowledged the marches via Twitter) has signed his first executive orders, and guys? You’re probably not gonna like it.

The President has reinstated an inactive policy put into play more than 30 years ago known as the “Mexico City Policy” or the “Global Gag Rule” that prohibits the United States from giving funds to international nongovernmental women’s health organizations if they offer abortion services or even suggest it as a viable healthcare option to be performed elsewhere.

It’s a far more restrictive policy than the one that has been in place since 1973: Known as the Helms amendment, the old policy already prevents these organizations from using any US funds towards the actual procedures of abortions. These new restrictions will cut them off entirely; leaving them unable to offer even basic health services, such as family planning or STD prevention/treatment.

With Planned Parenthood citing the US as the world’s largest donor with regard to global women’s health (we currently spend roughly $600 million per year on such programs, giving 27 million women access to care they would otherwise likely not receive), this has hugely far-reaching consequences for women’s rights not only in the US, but the world.

Though President Trump is certainly not the first to implement the rule — it was originally put into place by Ronald Reagan and upheld by George H. W. Bush before being repealed by Bill Clinton, brought back by George W. Bush, and repealed by Barack Obama as one of his first acts in office — it DOES feel like somewhat of a slap in the face following this weekend’s events.

Other orders put into play today included a hiring freeze and a withdraw from the Trans-Pacific Partnership deal. Get ready, y’all: It’s going to be a controversial four years.

Are you alarmed by this news? Tell us over @BritandCo.

Nicole Briese
Nicole is the weekend editor for Brit + Co who loves bringing you all the latest buzz. When she's not busy typing away into the wee hours, you can usually find her canoodling with her fur babies, rooting around in a bookstore, or rocking out at a concert of some sort (Guns N' Roses forever!). Check out all her latest musings and past work at nicolebjean.com.
Politics
Politics
Politics Womens Health