The Women’s March Around the World in 14 Powerful Photos 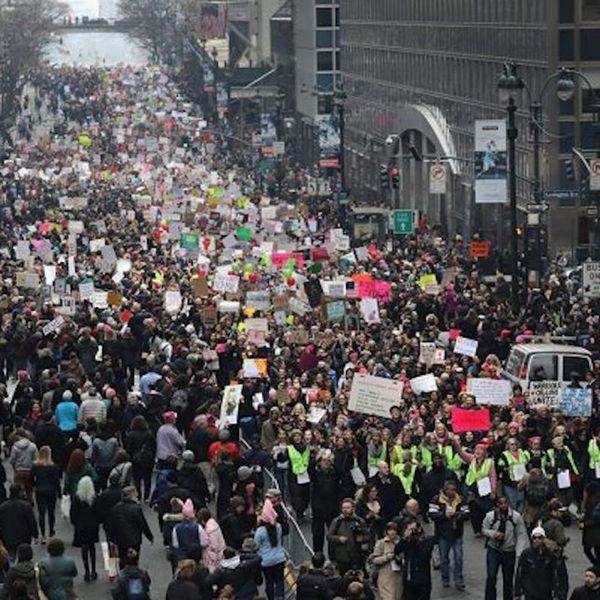 When we first heard about the Women’s March on Washington back in November, it was understood that the organized protest was meant to be a direct response to the sexism and gender inequalities many feared we would face as a country in the face of a new leader. But after witnessing what quickly became the largest inaugural protest in history, topping attendance for Donald Trump’s own inauguration, it was evident that there was something much larger at work here than American politics: In fact, the movement grew to such levels that it transcended our national borders, growing into a global mission shared by the world: women’s rights for all.

Though we couldn’t include all 600 cities — yes, 600! — that participated in the movement’s sister marches today, we can take you on a powerful journey around the globe with the 14 march photos to follow: Guess it’s true what they say: A picture really does speak 1,000 words.

1. Washington DC: Acting as ground zero for the movement, Washington topped attendance at 500,000 people (many of which just so happened to be famous). Holy schnikes! (Photo via Samuel Corum/Getty)

2. Los Angeles, California: Vanessa Hudgens and Kerry Washington were among the approximate 750,000 peeps helping to take LA by storm. (Photo via Angela Weiss/AFP/Getty)

3. Boston, Massachusetts: Boston’s protesters spanned as far as the eye could see in a physical sea of unification. (Photo via Getty)

4. New York City, New York: The streets of Trump’s home base were flooded with men and women, young and old, demanding equal rights for all. (Photo via Janine Squillari)

5. Miami, Florida: Miami citizens braved the heat, forming a line that seemed to have no end in their efforts to get the message out. (Photo via Sergi Alexander/Getty)

7. Seattle, Washington: The ladies of Seattle marched next to the city’s iconic Space Needle, telling Congress to keep its laws off their lady parts. (Photo via Jason Redmond/AFP/Getty)

8. Chicago, Illinois: Chicago’s march grew so big it actually had to be shut down for safety. Dang! (Photo via Derek R. Henkle/Getty)

10. Jalsico, Mexico: Mexico, whose fate has been largely tied to that of Donald Trump’s election, came together to show “hope over fear.” (Photo via Hector Guerrero/AFP/Getty)

11. Tel Aviv, Israel: The people of Tel Aviv showed plenty of force in their numbers with signs of solidarity. (Photo via Tomer Neuberg/Getty)

12. Paris, France: With the Eiffel Tower as its backdrop, Paris’s version of the march was scenic, to be sure, but every bit as serious. (Photo via Onur Usta/Getty)

14. Melbourne, Australia: Australia, being a day ahead of us, got a leg up on the marches, storming the streets en masse. (Photo via Recep Sakar/Getty)

Did you march? Tag us in your photos on Instagram @BritandCo.

Nicole Briese
Nicole is the weekend editor for Brit + Co who loves bringing you all the latest buzz. When she's not busy typing away into the wee hours, you can usually find her canoodling with her fur babies, rooting around in a bookstore, or rocking out at a concert of some sort (Guns N' Roses forever!). Check out all her latest musings and past work at nicolebjean.com.
Photography
Current Events
Photography Politics womens march
More From Current Events