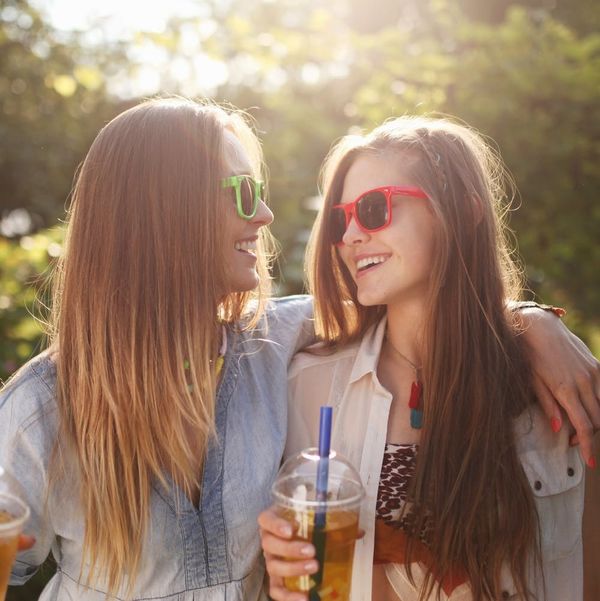 It’s easy, as grown-ass women, to forget the complexities that come with being a teenage girl. And then, when we do remember, we tend to forget that our own experiences weren’t defined by the politics of social media, the updated pressures of current social norms, or the accessibility that accompanies smart phones or the internet en masse.

And that’s where Laura Bates’s GIRL UP comes in. Founder of the Everyday Sexism Project (and author of a book of the same name), Bates’ guide to “kicking ass, claiming your woman card, and crushing everyday sexism” proposes to make teen years slightly less daunting and to go where no guides like this have gone before. Plus, it’s earned accolades from a few big names: Gloria Steinem maintains that it will “definitely save sanity and might save lives,” while Emma Watson warns that while it’s “not for the fainthearted… that might be what we need.”

Which we absolutely do. Whether navigating the aftermath of Bill Cosby’s recent sexual assault mistrial or the realities of the proposed GOP health care bill (that plans to defund Planned Parenthood and makes certain facets of womanhood expensive to insure), anger and frustration have become a default. Faintheartedness has no currency anymore. Published last year in the UK, GIRL UP has arguably come stateside at the perfect time. But that’s the thing — we need more.

Let’s be clear: The importance of any book that talks to teen girls like actual people cannot be stressed enough. Bates uses her 302-page guide to address everything from the importance of respecting proper pronouns to the double standard of social media (see: how young women are expected to behave online vs. young men) to rape culture.

The book includes detailed drawings of female anatomy and marries lessons in consent with the reminder that there’s no universal way to feel about sex. GIRL UP aims to be inclusive, is conversational, and works hard to remind teens that they have worth and are strong and are powerful. In the spirit of Rookie and Teen Vogue, it doesn’t talk down, and uses language that won’t alienate readers on the younger side of the spectrum.

But feminism boasts a long history of exclusion, prioritizing the struggles of straight white women over the experiences of women of color, or queer and trans women. It’s easy to introduce feminism as an idea that’s universally beneficial to every woman; that empowerment is the key to equality and information and that The Patriarchy is The Enemy. Which is what Bates largely does: While she raises good points about the double standard, she fails to acknowledge that every young woman’s experience is different based on their race or their socioeconomic standing.

And if we think teen girls don’t notice or that they’re not paying attention or that they’re not as angry as the rest of us, then we’re doing them a gross disservice. GIRL UP strives to include all readers, but by failing to tap into anger, frustration, and straight-up rage, it’s missing the chance to validate the feelings that largely define that demographic. Publications like Rookie and Teen Vogue are so affecting because they treat those emotions as viable and important. GIRL UP seems to mistake anger for negativity.

As a teen, it would’ve been great to have a guide to growing up; to have a book that confirmed my suspicions that being catcalled was gross or shed light on the double standard that’s come to define social media. But when we focus on the shiny, “empowerment” aspect of feminism over what makes it as important as it is flawed (because like all movements, it has to evolve and grow), we’re depriving teens of their right to participate. And their voices and perspectives and feelings are vital.

It’s possible to be angry and to be rage-filled and still funny and positive and interesting. It’s possible to address real issues in a way that’s accessible for a range of ages. It’s also unfair to propose that one author and one book do it all. Which is why as well-intentioned as GIRL UP is, it can only be a good start.

GIRL OUT comes out in the US today, July 11. Tag us on your purchase @BritandCo!