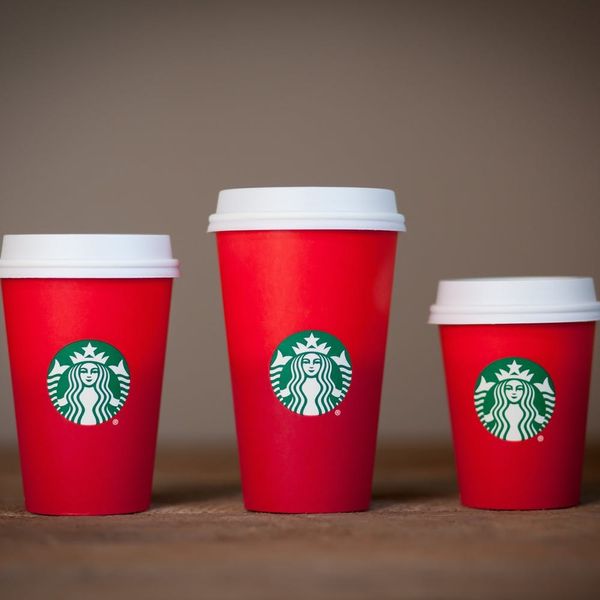 For many, the holidays are marked by the change in weather, the holiday windows in department stores, the setting of holiday plans with friends and family and the appearance of Starbuck’s iconic red cups. But this year, the coffee brewers decided to go a minimalist route with their red cups and have been getting considerable backlash on social media due to their lack of “holiday spirit” (i.e. mistletoe, snowflakes, holly, reindeer — you get the picture) and over-observance of… political correctness? “In the past, we have told stories with our holiday cups designs,” said Jeffrey Fields, Starbuck’s Vice President of Design + Content. “This year we wanted to usher in the holidays with a purity of design that welcomes all of our stories.” People got so incensed over the cups, the hashtag #MerryChristmasStarbucks actually trended on Twitter.

But then Dunkin’ Donuts jumped into the fray by releasing their own holiday cups last week that certainly have a healthy dose of all that was “missing” on the Starbucks cups.

The donut chain’s coffee cups certainly tick off everything on that holiday cup checklist. They come complete with a holly + evergreen wreath and the word “Joy” written in big script letters, and they’re red and green all over. How’s that for Christmas cheer?

Joy "I love that word – it's profound – and captures true meaning of Christmas." @DunkinDonuts gets it right. pic.twitter.com/LT9ytTTvXk

People are actually applauding Dunkin’ Donuts for “saving Christmas” and for “getting it right.”

Still others see this as a clever marketing tactic — riding on the coattails of a competitor’s controversy for more publicity.

Perhaps rather than getting outraged over the design of the cups, we ought to take issue with the fact that the “Joy” Dunkin’ Donuts cup is still made of non-recyclable styrofoam and will probably sit in a landfill for literally a million years. Just sayin’…

What do you think of all this holiday cup controversy? Tell us in the comments below!

Kimberly Wang
Kimberly Wang writes about all things pop culture, tech, style, and beauty. She's a Bay Area transplant and has an MFA in Creative Writing from Columbia University. On a sunny New York day, you can find her hanging out with her mini schnauzer Isabelle Jellybean on a blanket in Central Park.
Starbucks
Pop Culture
Starbucks Twitter
More From Pop Culture