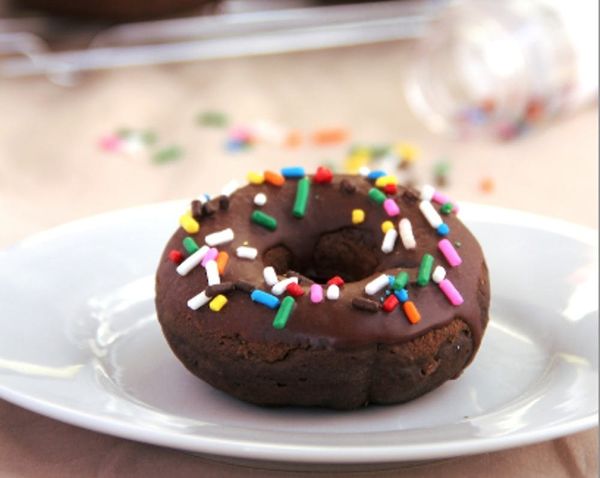 There were so many raves over our healthy donut that we couldn’t resist sending some more healthy hacks your way. We’re not suggesting that you should scarf down a dozen of these bad boys in one sitting, but if you do, you won’t have a coronary on the spot. (Yippee!) So skip your usual over-crowded brunch spot this weekend and impress your friends with a batch of homemade donuts.

1. Pecan Pumpkin Glazed Donuts: And you weren’t even expecting them to be gluten free. Thanksgiving isn’t the only time to enjoy pumpkin. Paired with a cup of coffee, you’ll be smitten over the sweet, gooey glaze and crunchy pecan topping. (via Purely Twins)

2. Fluffy Chocolate Donuts: Fluffy and fat free? Um, yeah. We didn’t believe it either. But these chocolate donuts are super fluffy, super moist, super easy, and super fat free. (via Mix it Up)

3. Chai Spice Donuts: Sucker for chai lattes? Now imagine that in a donut. If there’s one thing we’ve learned, it’s not to underestimate the flavor of tea. Rolled in cinnamon and sugar, these chai-flavored donuts will have you licking your lips and singing a sweet tune. (via On Sugar Mountain)

4. Olive Oil Mini Donuts: You might be thinking we’re crazy to even suggest olive oil donuts, but trust us when we say “o-m-g.” Baked with lemon juice and rosemary, these sweet little bites are perfect for breakfast or even dessert. (via Heavy Table)

5. Vanilla Donuts with Vanilla Glaze: While chocolate and fillings and flavors are nice, but sometimes, a morning just calls for vanilla. Nothing fancy but something perfect. These baked vanilla donuts taste like Krispy Kremes, but with half the calories. (via Averie Cooks)

6. Blueberry Lemon Yogurt Donuts: The name speaks for itself. Between the freshness of blueberries and lemon with the creaminess of yogurt, we couldn’t decide which part is our favorite. You won’t be able to eat just one, but don’t feel guilty. They’re packed full of fruit. (via Making Thyme for Health)

7. Coconut Flour Cake Donuts: If you’re thinking about going paleo, donuts are a good way to start. These are perfectly dense and coated with just enough chocolate for dipping in coffee. (via Tasty Kitchen)

8. Baked Red Velvet Donuts: Our two loves: red velvet + donuts. And yes, they happen to be adorable. But more importantly, they’re delish. With a cake-like texture, vanilla glaze, and sprinkles, we can’t think of any reason not to try these. (via P.S. Heart)

9. Orange Poppy Seed Donuts: Orange is the new lemon. If you like your donuts fluffy, then you’ll be in love. (via The Little Epicurean)

10. Healthier Classic Powdered Donuts: Remember sugary fingers as you unwrapped those Little Debbie packs as a kid? Now you’re all grown up and so are your donuts! (via On Sugar Mountain)

11. Vegan Donuts with Espresso Glaze: As soon as we saw espresso as one of the ingredients in this recipe, we were insta-fans. (via Minimalist Baker)

12. Baked Nutmeg Donuts with Berry Icing: While most donuts are berry-filled, these are berry-iced… making for a heavenly combination. Sometimes nutmeg can be overpowering, but combined with the tartness of the berry, this recipe is pure bliss. (via Vintage Mixer)

13. Greek Yogurt Cinnamon Roll Donuts: Did we mention these taste like cinnamon rolls? Yeah, our mouths are watering too. (via Damn Delicious)

14. Mini Baked Chocolate Sprinkles Donuts: Sprinkles make everything better. Truly. So when baking donuts to save some calories, it’s totally acceptable to dip them in sprinkles. (via Kitchen Artistry)

15. Whole Grain Strawberry Donuts: We had to finish with a good and hearty recipe. Packed with fruit and whole grains, you won’t even feel like you’re eating a donut with this recipe. With minimal sugar, these are the perfect start to your morning. (via Plant Food Fabulous)

What’s your favorite healthy donut recipe? Let us know in the comments below!

Stacy Hillstead
Passionate about health and fitness, Stacy is inspired by creative home design and crazy about cooking. She's a wedding planner by day and a blogger by night. Mastering the craft of DIY, she's a self-taught decorator, an avid list maker, and in love with all things pretty.
Breakfast Recipes
Recipes
Breakfast Recipes Recipe Roundup
The Conversation
Reviews:
More From Recipes