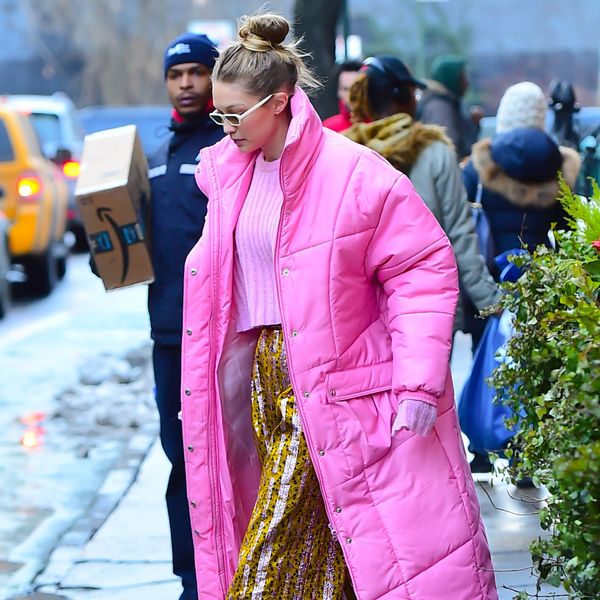 Step aside, teddy. Winter's must-have duvet coat (the uber trendy cousin to your trusty puffer) will have you covered in non-stop warmth at first wear. Inspired by — you guessed it — a big ol' down comforter, this highly versatile outer layer is essentially a coat and blanket in one. Swipe through for 11 street style-approved, lazy girl-tested toppers that are here to bring you out of hibernation.
Print-tastic: Calling all bona fide print masters! If head-to-toe leopard is wrong, then we don't want to be right. (Photo via Christian Vierig/Getty)
Scotch & Soda Leopard Print Jacket ($225): Just extra enough for after-hours, this padded animal print jacket would look so, so dope with a slinky slip dress and combat boots.
Exaggerated Proportions: Only on the streets of Paris do voluminous bubblegum pink puffers reign supreme. (Photo via Timur Emek/Getty)
Universal Standard Kanda Puffer Coat ($230): No bedhead required to step out in this toasty AF cocoon puffer.
Go Bright: Dabble in spring's neon trend with a traffic-stopping highlighter yellow down jacket. (Photo via Melodie Jeng/Getty)
Lovers + Friends Lindsey Belted Puffer Jacket ($228): Less bulk, more sass. Cinch the waist on this lime style for an après ski vibe.
Logo Mania: Spotted: Fendi's monogram print puffer looking downright regal with a gold dress and metallic boots. (Photo via Timur Emek/Getty)
Chiara Ferragni Down Jacket Logomania ($869): This influencer-approved buy featuring Chiara Ferragni's signature eye logo is one to watch.
FROW-Ready: Anchor the season's pièce de résistance with a crossbody fanny pack, a girlboss-approved suit, and sporty trainers for a fashion girl update. (Photo via Matthew Sperzel/Getty)
Nanushka Root Beer Puffer Coat with Hood ($854): Your beloved puffer jacket all grown-up. Brave the latest Nor'easter with this buttery vegan leather creation from Nanushka.
All Black Err'thang: Ten-hut! Come over to the dark side — and achieve outfit excellence — with a tough-girl parka that commands attention. (Photo via Edward Berthelot/Getty)
Mango Oversized Longline Zip Front Padded Coat in Black ($167): The great thing about this hue? It goes with, well, everything.
Granny Gets It: Do your inner granny proud with a quilted overcoat and an eclectic assortment of mismatched pastel separates. The only thing missing is a pair of round specs. (Photo via Edward Berthelot/Getty)
Rachel Antonoff Louie Quilted Robe in Venti Floral ($428): TFW your winter topper is basically a quilted robe in disguise.
Classic and Cool: This PFW attendee's tawny-colored buy feels like a nod to the English countryside, especially when coupled with a bucket bag and Chelsea boots. (Photo via Edward Berthelot/Getty)
Uniqlo Women Ultra Light Down Compact Coat ($80): Not too puffy, but justtttt right, this perfectly packable coat is a thrill at $80.
Size Matters: Nobody, we mean nobody, knows how to do an oversized puffer quite like Balenciaga. (Photo via Matthew Sperzel/Getty)
Warehouse Asymmetric Padded Coat in Red ($157): Just add an extra-long waist-cinching belt for a streamlined look.
Channel Your Inner Michelin Man: ...but make it FASHUN. Spark joy in a maxi-length olive duvet coat. (Photo via Christian Vierig/Getty)
Wilfred The Duvet Coat ($350): Sub-zero temperatures? No problemo when you're swaddled in a ginormous blanket.
Let Your Outerwear Do the Talking: We can't decide what we love more: Gigi Hadid's Barbie pink puffer or her patterned culottes. (Photo via Raymond Hall/Getty)
Mansur Gavriel Mega Coat ($1,195): This millennial pink Italian down coat may make you feel like a padded marshmallow, but you certainly won't look like one.

Will you be test-driving a puffy duvet coat? Follow us on Pinterest for more winter style inspo!

Will you be test-driving a puffy duvet coat? Follow us on Pinterest for more winter style inspo!