Emma Stone Is Making Waves With Her New *Perm* 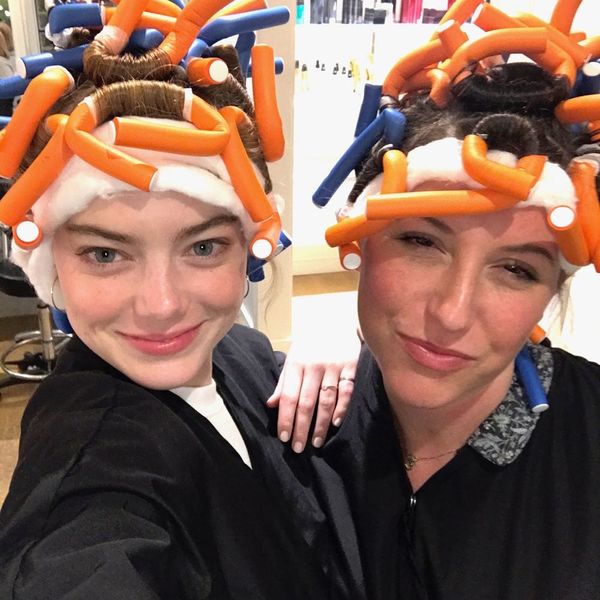 Emma Stone has experimented with a range of (sometimes surprising) hair hues, but she’s pulling a switcharoo with her hair *texture* this time around. The Lala Land actress officially has 24/7 beach waves, thanks to a new perm!

We have a permanent bond! Some friends get tattoos, well we get perms! We’re here to tell you that they are BACK and theyre not your grandmas perm! Especially when you are in the amazing hands of @mararoszak and @bykileyfitz at @mare_salon #curlyisthenewstraight this is the #newwave

The 29-year-old hit up the Mare Salon in West Hollywood with her makeup artist and friend, Rachel Goodwin, who also took the perm plunge. The MUA documented the process in a series of three pics on her Instagram. In the first, the two are all smiles and smizes in salon robes and foam cylinder rollers (which help create the wavy hair pattern). “We have a permanent bond!” the NARS Director of Pro Artistry gushed. “Some friends get tattoos, well we get perms!”

Before you start getting ’80s flashbacks, rest assured that *this* decade’s version of the treatment delivers a relaxed wave — not ringlets. “We’re here to tell you that [perms] are BACK,” Goodwin continued, “and they’re not your grandma’s perm!” Stone joins a host of other celebs in the curly hair club, including Blake Lively and Jenna Dewan Tatum, who ignited the trend back in 2016.

📷 Rachel Goodwin via Instagram: Some friends get tattoos, well we get PERMS! We’re here to tell you that they are BACK and they are not your grandmas perm! pic.twitter.com/qUmaUt2FzO

The duo hasn’t posted pics of the final result (yet), but a Twitter fan account dedicated to the actress did. In it, it looks as if the newly-curly hair isn’t completely dried, so it’s hard to tell what the *actual* final result will look like. We can’t wait to see how the redheaded beauty rocks the look IRL!

Have you ever considered getting a perm like Emma’s? Let us know @BritandCo!