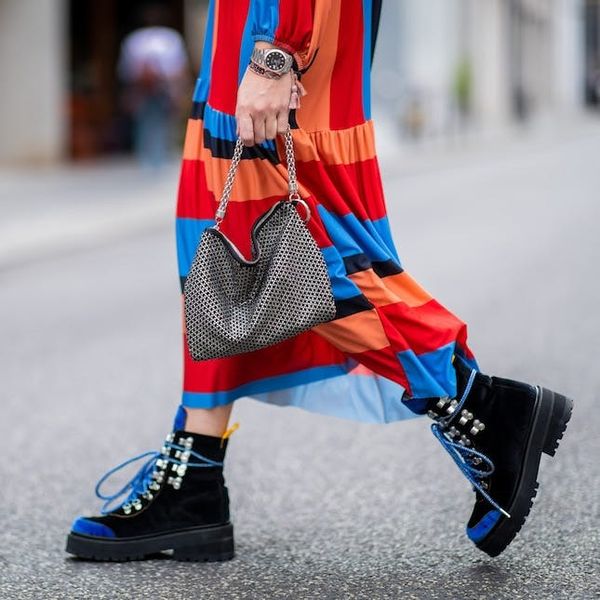 Is it even really fall if you haven't bought your first new pair of boots ? Of course not. They're an important investment, as footwear goes. Your boots can take you from early autumn through winter and into spring with just a few style swaps (say, a breezy floral dress for a chunky knit with jeans — and back again). This year, prepare to have your pick of more than a few try-worthy trends. These are the must-have fall boots the street style crowd has already been sporting.
Cowboy Boots: We prefer to call them cowgirl boots. The western-inspired footwear trend has seen a boost thanks to the likes of Coach and Selena Gomez, not to mention industry insiders who have been rocking them in a way that's much more Rodeo Drive than, well, rodeo. (Photo via Christian Vierig/Getty)
Mango Leather Cowboy Ankle Boots ($170)
Jeffrey Campbell On The Ranch Western Boot ($258)
Slouchy '80s Inspired Boots: The era of shoulder pads and big hair is a divisive one in terms of style but there's no denying the '80s have made a major return for fall 2018. While we are leaving our leg warmers in the past for now, we're joining fashion girls everywhere by embracing the slouchy boot. (Photo via Christian Vierig/Getty)
Lulus Morgana 1 Taupe Suede Mid-Calf Booties ($48)
Aldo Cradolia ($140)
Animal Print Boots: It's footwear gone wild! Leopard, snake, cheetah, and zebra are just some of the animal prints on offer this season. So follow your instincts and get on board with a version in any heel and shaft height that will have your look instantly on trend. (Photo via Jeremy Moeller/Getty)
Kendall + Kylie Hadlee Block Heel Booties ($150)
ATP Atelier Nila Boot in Printed Snake ($554)
White Boots: One of the most unexpected trends of the last year has surprising staying power. White boots are sticking around for fall and making transitional dressing that much easier. (Photo via Edward Berthelot/Getty)
Dolce Vita Dot Booties ($180)
Marc Fisher Ltd Ulana Knee High Boot ($290)
Combat Boots: Whether it's '90s nostalgia or a style metaphor for the many battles women are currently fighting, the combat boot is alive and well for fall. Go full-on grunge era or soften them by wearing with feminine fabrics and prints. (Photo via Christian Vierig/Getty)
Dr. Martens Bentley II HRT Brogue Boots ($150)
Steve Madden Hills ($110)
Knee-High Leather Boots: This shaft height took a backseat to over-the-knee boots in recent seasons but no longer — the knee-high boot is poised for its comeback season this fall. It comes in many iterations that encompass other trends, so get your two-for-one special with a taller take. (Photo via Christian Vierig/Getty)
Zara Tall Leather Boots ($169)
Tory Burch Women's Brooke Slouchy Leather Tall Boots ($498)
High Shine Boots: Metallic finishes are making the rounds — and making outfits. This bold boot is the lazy girl's ultimate style hack: Just pair with a tee and jeans and watch your look become a lewk. (Photo via Edward Berthelot/Getty)
Splendid Nestor Kitten Heeled Booties ($158)
Alice + Olivia Dobrey ($450)
Hiker Boots: They're a bit less punk than the combat boot but just as in demand this fall. No matter if you're not headed to rough terrain, this outdoors-inspired option looks as good with more indoor-friendly fare like pleated skirts and dresses. (Photo via Christian Vierig/Getty)
Topshop Ants Biker Boots ($150)
Danner Cascade Mountain Hiker Boot ($360)