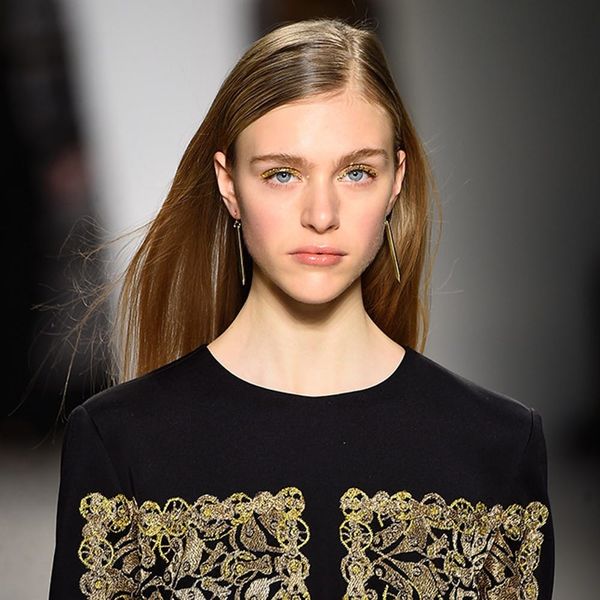 When it comes to runway beauty, the looks are not always super wearable. If you want to rock raccoon eyes and a totally see-through top, you go for it girl, but the majority of us might take a runway trend and water it down to make it streetwear ready. However, over the course of NY Fashion Week, we spotted a whole bunch of hair trends that we’d wear right off the catwalk, no dilution required.

1. Meh Hair: Barely touched and minimally styled, this trend takes term “bed head” to an extreme. And it’s probably the easiest trend to take on considering you really have to do nothing. It’s a lazy girl’s dream. The look has been criticized for working exclusively with certain textures, but we say no matter what sort of hair you have – frizzy, ultra straight, a little bit greasy – just roll with it. It is “Meh” hair after all. (Photos via JP Yim/Getty)

2. Knotty Hair: Putting a fun, fresh spin on the classic ponytail, these styles were all about twisting things up. From the ultra-knotted look at Eckhaus Latta to the simple, ’90-inspired half bun spotted at Son Jung, theses ponies are totally wearable off the runway. Don’t believe us? Check out our tutorial that takes on a few of these styles. (Photos via Fernanda Calfat/Astrid Stawiarz/Getty)

3. Slicked Hair: Aside from the “Meh Hair,” this was by far the most popular hair trend at fashion week. Whether it was just a little bit of gel or a full head of the stuff, it was spotted all over the runway. As far as wearing this on the street, an extreme version of this might look, well… extreme. But adding a little bit of slickness like what we saw at Prabal Gurung (pictured left) is a definite do. (Photos via ArunNevader/Fernanda Calfat/Getty)

4. Origami-Inspired Updos: Working in the same vein as the slicked hair, there were also a few examples of some gravity-defying updos, like the ultra-twisted buns at Tracy Reese or the fanned hair at Suno. How wearable is that bun as is? Probably not very, but it does invite ideas for fun ways to reinvent the classic top knot. And as far as the fanned hair, we’ve got everything you need to master that. (Photos via Mireya Acierto/Bennett Raglin/Getty)

5. Ponytail Embellishments: Taking a queue from Lorde’s sleek low pony she rocked at the Golden Globes, the models over at Carolina Herrera sported slicked-back ponies complete with a thick hair cuff. Similar to Carolina Herrera, the hair over at Derek Lam showed off tightly pulled-back low ponytails with ’70s (and ’90s) inspired leather accessories. (Photos via Monica Schipper/JP Yim/Getty)

6. Exaggerated Side Part: Falling yet again into that slicked hair trend, a gelled over, exaggerated side part was another super popular look. We’ve been predicting the rise of the extreme side part for awhile now, but this fashion week has cemented the style’s place in 2015. We’re into the sleek, gelled look, but if you’re not you can also try it without the gel to add some extra volume up top. (Photos via JP Yim/Frazer Harrison/Getty)

7. Headbands: The ’90s staple has officially made a comeback, but in a very 2015 sort of way. These aren’t the headbands your mom made you wear on Easter. Sleek, metallic and even made of leather, the style works equally as well as a lazy girl hair hack with a messy low bun or with a voluminous blowout. best (Photos via JP Yim/Frazer Harrison/Getty)

Which fashion week hair trend can you not wait to try? Share with us in the comments below, or better yet try one out and tweet us a pic!