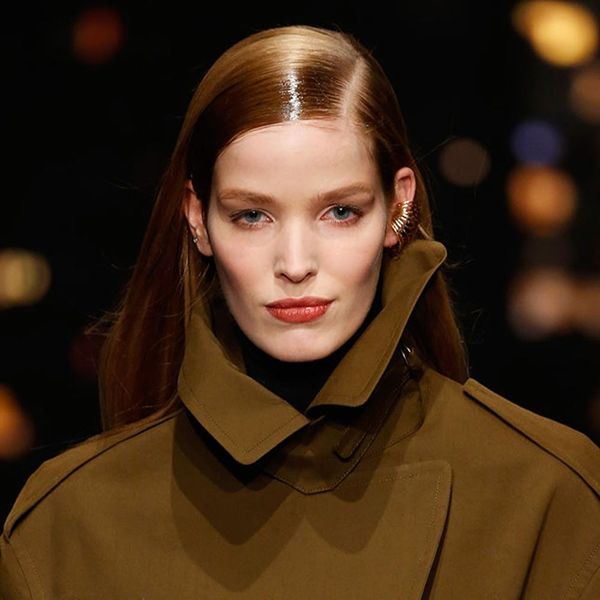 New York Fashion Week might be coming to a close, but we’re still very much on a high from all the stellar looks we’ve seen over the past few days. From that epic Zac Posen dress to the easiest hair trend ever, we’re almost tempted to skip right on over summer and jump straight back into fall. Okay, maybe not that tempted. We sorta need that beach vacay to stay sane. One aspect of NYFW that’s just as important as clothes is the makeup. A lot of trends spotted on the runway are hard to translate onto the street, but here are a few we’re guessing you’ll be sporting in some variation long before fall 2015.

1. A Winter Glow: Pick up that bronzer and definitely your blush, because a warm, peachy complexion popped up at both J.Crew and Kate Spade New York. If your city’s cold weather already turns those cheeks a little rosy, just pop on a bit more blush to make a statement without looking like a doll. (photos via Cindy Ord/Fernanda Calfat)

2. Nail Art: We’ve been seeing this on Pinterest and bloggers for some time now, but it looks as though the trend has finally been made runway-ready. Although, what we saw on the runway wasn’t exactly as cartoonish as what you might see on your favorite blogger’s site – no pizza nails here. Our favorite manicures were the squiggly lines we spotted at Adam Selman and the minimal white lines at Suno. (photos via @mpnails and Mireya Acierto/Getty)

3. Bejeweled Liner: Over at Rodarte the models rocked tiny Swarovski sparkles under their eyes that were attached via a silver string and glue. We saw a similar technique at Ohne Titel, where makeup artists attached plum-color caviar beads under the lash line. (photos via @officialrodarte and Mireya Acierto/Getty)

4. Minimal Makeup: Because sometimes the best look isn’t technically a look at all. Going along with the bedhead hair we spotted earlier, this undone look was popular all throughout the week. We particularly loved it over at Creatures of the Wind and Jason Wu. If you’re really loving this, give our flawless face makeup tutorial a try and leave your look at that. (photos via Arun Nevader/Neilson Barnard/Getty)

5. Brick Lips: Looking for a new shade of red to rock? Well, you may have just found it. With ’90s makeup making a definite comeback, this shade resembling brick was spotted at both 3.1 Philip Lim and Donna Karan where – according to Style.com – the makeup artists blended two shine-free tubes from MAC (Spirit and Verve) to create the shade. (photos via Neilson Barnard/JP Yim/Getty)

6. Minimal Graphic Eyes: While we did see some heavy eye makeup over NYFW, what stuck out most were the minimal, graphic looks. Over at Suno, we spotted a thick rectangular line along the outer eye, while at Yigal Azrouël the models rocked a more dramatic curve that arched from the corner of the eye to the middle of the eyelid. (photos via Mireya Acierto/Jemal Countess/Getty)

7. Glitter Eyes: Taking things a step up from the bejeweled liner, models over at Tadashi Shoji showed off some super glittery eyes. For a slightly more subtle option that’s still very sparkly, try something more akin to the sparkle lashes over at Carolina Herrera. Style.com reports that the makeup artists applied glitter across false lashes via beads of silicone to make it look as if they were water droplets. (photos via Frazer Harrison/Monica Schipper/Getty)

Which of these beauty trends would you be up for trying come fall? Share you thoughts in the comments below.