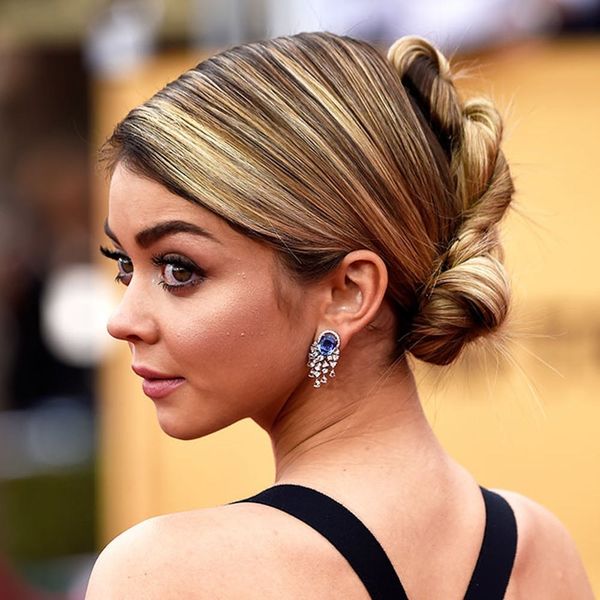 With award shows front-loaded into the first few months of the year, celebs start to solidify themselves as red carpet darlings as early as the second week of January. That means even though major honors like the Grammys and Oscars have yet to take place, there are *already* no shortage of glamorous looks worn by your favorite stars in 2015, particularly in the hair department. From Lorde’s modern slicked-back ponytail to Emily Blunt’s tousled, ethereal braid, the twisty, tossed up looks we’ve seen this award show season have been consistently on-trend and just plain pretty. We’ve sorted through bunches of red carpet snaps to find the best celebrity updos of the year so far, all of which are pictured below. Scroll through to see which of your favorite stars have truly award-worthy hair.

2. Keira Knightley: Keira’s wispy, twisted chignon she wore at the Golden Globes feels even more ethereal with a metallic feather hairpin placed above her bun like it just fell from above. It doesn’t get much dreamier than this. (Photos via Jason Merritt/Getty)

3. Emma Stone: Emma’s no-frills SAG Awards hairstyle — a sleekly pulled-back ponytail — is the perfect ‘do to showcase her stunning ronze-colored locks. The slick styling plays up the slightly metallic highlights in her tresses, a combo that makes her hair just glisten. (Photos via Ethan Miller/Getty)

4. Jennifer Lawrence: We caught JLaw at the Producer’s Guild Awards with a romantically tousled updo full of pulled-apart curls. The ones that are completely freed of the pins make the hairstyle. (Photos via Frederick M. Brown/Kevin Winter/Getty)

5. Dascha Polanco: The fishtail braid Dascha flaunted at the SAG Awards is nothing less than epic. Whether your favorite part of this intricate braid is the transition from slicked back to expertly tattered or the way her gray tips bring out the details of the plaits, one thing’s for certain: we’d make our dress get out of the way for it too. (Photos via Frazer Harrison/Alberto E. Rodriguez/Getty)

6. Kate Mara: Kate’s Golden Globes updo mixes the best elements of vintage and modern minimalist hairstyles — specifically a ’60s-feeling bouffant and a fanned out, accessory-free low pony — for a look that feels more of-the-moment than any other ‘do on the carpet so far. (Photos via Frazer Harrison/Jason Merritt/Getty)

8. Sarah Hyland: Sarah’s SAG Awards hairtsyle has so much to swoon about, from those bleached highlights to that severe part. But obviously the twisted tresses take the cake (we mean, who cares about the above bun business when you’re sporting a hairstyle as stunning as this?). (Photos via Frazer Harrison/Getty)

9. Lorde: We got over the shock of seeing Lorde without her signature curls at the Golden Globes pretty quickly thanks to this super straight style that complements her menswear-inspired outfit to a tee, yet doesn’t erase her gothy tendencies in the slightest — just look at that that black elastic wrap and unconventional down-to-the-elbows length. (Photos via Frazer Harrison/Getty)

10. Laverne Cox: While Laverne’s SAG Awards isn’t technically a full-on updo, her crown braided bangs are absolutely enough to get her eye-catching look ranked among the best of the pulled-back best: we haven’t seen a more interesting — not to mention more beautiful — way to increase volume, play with texture, and flat-out WOW. (Photo via Ethan Miller/Getty)

11. Kerry Washington: Kerry’s Producer’s Guild Awards ponytail might be the most polished pulled-back look we’ve seen yet, with her tresses sculpted to create a subtle frame around her face before cinching at the nape of her neck. We’re calling it nothing less than a First Lady-worthy look. (Photos via Kevin Winter/Frederick M. Brown/Getty)

13. Lupita Nyong’o: Leave it to Lupita to mix prints and braids in one stunningly electic red carpet look. We love the way her plaits are thinner at the scalp and grow larger as they’re twisted upward until they culminate into a beehive-like style that doesn’t feel a bit retro. (Photo via Ethan Miller/Getty Images)

14. Chrissy Teigen: Chrissy’s Golden Globes hair proves that you don’t have to wear your hair down to have covetable beach waves. The ultra-high placement of the pony put her wavy tresses in the spotlight from just about any angle. (Photo via Jason Merritt/Getty)

15. Felicity Jones: Felicity Jones can rock a slicked-back chignon like nobody’s business: that we know is true. But it was refreshing to see her donning an edgier ‘do at the Producer’s Guild Awards with a tousled pomp and texturized bun. Here’s to hoping she channels her edgier side more often. (Photo via Kevin Winter/Getty)

What red carpet updo is your favorite? Tell us in the comments below.