The 20 Most Ridiculous Fast Food Inventions Ever 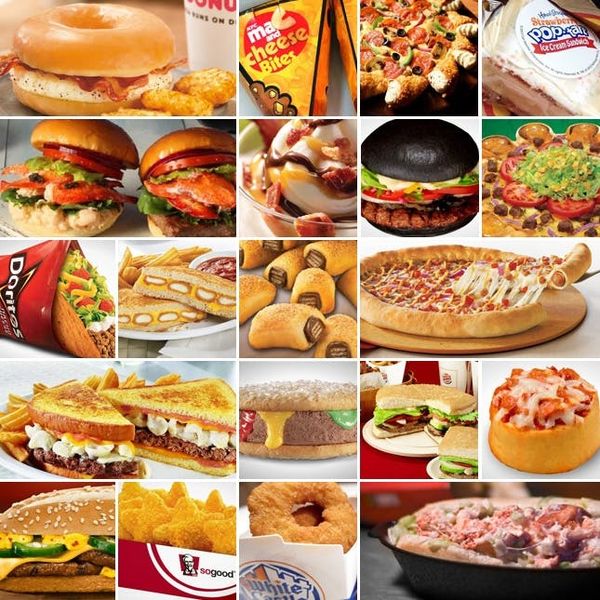 Food bloggers, Top Chef contestants, and Brit + Co. interns aren’t the only crazy innovators on the culinary scene. The folks behind the scenes at places like Pizza Hut, KFC, Carl’s Jr, and Burger King are constantly serving up ridiculous new things that make some people swoon, make some people gag, and make some people turn vegetarian. Here 20 such creations that made us look.

1. Dunkin’ Donuts Bacon and Eggs on a Donut: Talk about an all-in-one breakfast sandwich!

The description is enough to make us need some fresh air: Parmesan encrusted cones filled with Philadelphia cream cheese and chicken.

4. KFC Mac and Cheese Bites: What happens when your favorite guilty pleasure gets breaded and deep fried? Possibly a heart attack.

5. Burger King Bacon Sundae: “Put bacon on it is” the new “put an egg on it” but we’re not sure Burger King should jump on board in the dessert department.

7. Pizza Hut Cheeseburger + Chicken Nuggets Stuffed Crust: While we did love us a good stuffed crust in the late ’90s, putting actual cheeseburgers and chicken nuggets into an already pretty unhealthy pizza is taking it about 10 steps too far.

8. Burger King Black-Bunned Burger: Say what? The bun has actual charcoal mixed into the dough to create a black bun. The condiment of choice? Squid ink ketchup. Yikes.

9. Taco Bell Doritos Locos Tacos: More of a mainstream food mashup, we can’t believe how successful this seemingly harebrained late night creation is turning out to be.

11. Pizza Hut Kit Kat Pops: Kit Kats are so awesome as it is – why wrap them in pizza dough?

13. Pizza Hut Hot Dog Stuffed Crust Pizza: The high quality of this photo just doesn’t make up for the insanity that goes into putting a series of hot dogs inside of a pizza.

14. Denny’s Mac ‘n Cheese Big Daddy Patty Melt: At a whopping 1690 calories, this seems like the type of sandwich you take one bite of and immediately regret.

15. Carl’s Jr Ice Cream Burger: It’s an ice cream sandwich that looks like a burger, with some weird ketchup and mustard style icing. Too weird.

19. KFC Shrimp Stars: It’s like an edible ninja star! What?

20. McDonald’s McLobster: And just when you thought you’d seen it all, McDonald’s in Canada serves up the McLobster. Where on earth do those lobsters come from?

Anjelika Temple
As Co-Founder and Chief Creative Officer of Brit + Co, Anjelika Temple brings her voracious consumption of all things creative and colorful to DIY projects, geeky gadgetry finds and more. When she's not DIY-ing her heart out, you'll find her throwing dinner parties with friends or adventuring with her husband David, their daughters Anokhi and Indira, and their silly dog Turkey.
Fast Food
Recipes
Fast Food
The Conversation
More From Recipes