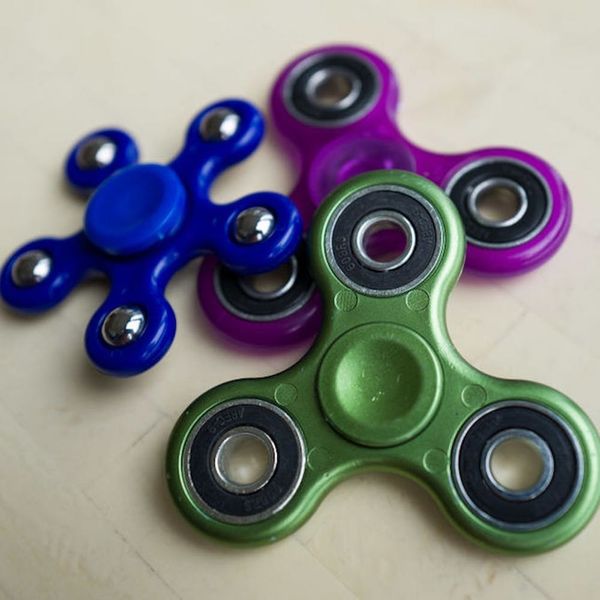 Bad news, fidget spinner junkies. The popular devices you’ve been using to stimulate your brain (and provide your quick beauty fix) for the past year are now being hailed as potentially dangerous after high-tech versions have reportedly been bursting into flames. First our phones, then our hoverboards, now this!? We’re not sure how much more we can take!

According to Alabama’s WBRC Fox News channel, one mother’s nightmare came true when her son plugged his Bluetooth fidget spinner, which plays music through its speakers, into its charger. Forty-five minutes later, as Kimberly Allums told the outlet, “He noticed that it burst into flames and he just started screaming. I was downstairs and all I heard was, ‘Fire… Fire,’ and the fidget spinner had literally, it was smoking, it was in flames.” Um, yikes?

Lest you think that this was merely a fluke, you should probably know that the same thing reportedly happened to a family in Michigan after they had left their Bluetooth fidget device plugged in for 30 minutes.

Though the items have yet to face a recall, the Consumer Product Safety Commission has informed Gizmodo that they are investigating the incidents. In the meantime, they’re also recommending that anyone using the battery-powered devices stay with them while they are charging.

“Never charge a product with batteries overnight while you are sleeping,” they advised. “Always follow the manufacturer’s instructions and use the charger from the manufacturer that is designed specifically for your device.”

Furthermore, the commission is recommending that parents keep these products away from young children, who can choke on small parts, and to warn older children not to put the spinners in their mouths. Duly noted!

Michelle Carr, who experienced the incident in Michigan, agrees, saying, “I know there tons of kids who want to get them, but if you plug them in, just stand by and make sure it’s charged and doesn’t catch.”

If you’ve experienced a similar incident of your own with the spinners, users are encouraged to report them here.

Will this news make you give up your spinner obsession for good? Tell us over @BritandCo.

Nicole Briese
Nicole is the weekend editor for Brit + Co who loves bringing you all the latest buzz. When she's not busy typing away into the wee hours, you can usually find her canoodling with her fur babies, rooting around in a bookstore, or rocking out at a concert of some sort (Guns N' Roses forever!). Check out all her latest musings and past work at nicolebjean.com.
Tech News
Tech
Tech News
More From Tech