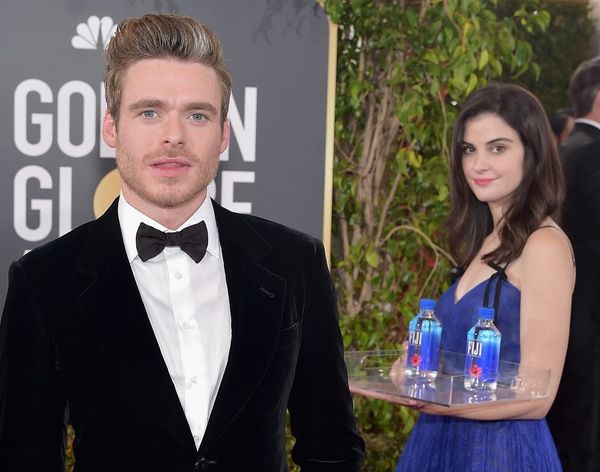 The 2019 Golden Globes had their fair share of memorable moments, from Sandra Oh and Andy Samberg’s wholesome opening to Regina King’s unforgettable speech. One of the night’s biggest highlights, though, happened before the show even started, on the red carpet. We’re talking, of course, about Fiji Water Girl, the woman who appeared in the background of several celebrity photos, accidentally becoming a meme in the process.

The woman in question is Kelleth Cuthbert, a model and actress originally from Toronto, Canada. She was on the Globes red carpet working a side gig as a Fiji rep and handing out water to the stars. Her persistent photobombing was just a happy accident.

“There’s tons of photographers everywhere. It doesn’t matter where you stand, you’re in the crossfire of every shot,” she explained to People. “You’ve gotta have good face, at least, if you’re gonna be hovering in the background frequently.”

Indeed, Cuthbert’s knowing look and smirk as she held a tray of bottled waters was an instant hit on Twitter, although she says she didn’t know she was in the photos, or that she had become a meme, until much later.

“I didn’t find out until the last stragglers of the red carpet were heading into the awards ceremony, and all these people walking by started shoving their phones in my face and showing me that I was trending on Twitter,” she said.

Of all the celebrities Cuthbert photobombed — including Amy Adams, Idris Elba, Jamie Lee Curtis, Tony Shalhoub, and many, many more — Cuthbert said that one stood out as a personal favorite. “I loved the Jim Carrey one,” she admitted to People. “I love his work. I grew up watching his movies and thought it was a funny thing to find myself in the background of.”

Do you have a favorite Fiji Water girl photobomb? Let us know @BritandCo!