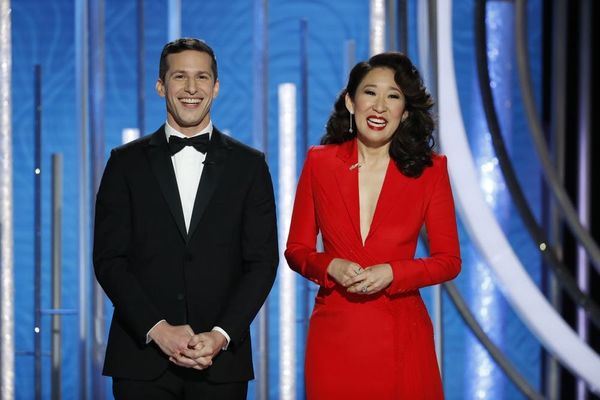 Andy Samberg and Sandra Oh might be the nicest awards show hosts ever. The Brooklyn Nine-Nine actor and the Killing Eve star teamed up for the 2019 Golden Globes on Sunday, January 6, and delivered a wholesome opening that got the night started on a positive, celebratory note.

“We’re the only two people in Hollywood who haven’t said something offensive,” Samberg joked of why they were chosen for the gig. Lest anyone worry that their reputations as the “nicest people in show business” would result in a snooze-fest, though, they declared, “You fools are all about to get roasted!”

They then proceeded to call out people in the audience — but every attempt at an insult ended up as a compliment. First up was Spike Lee, or as Samberg called him, “Mr. Do the Right Thing.” Because “you know who does the right thing? [Spike Lee,] as a director.” Bradley Cooper was next to be burned by Oh, who told him, “You are hot.”

Oh went on to single out Gina Rodriguez, saying she was surprised to see the Jane the Virgin star in attendance, because the last time Oh checked, Rodriguez “resided in heaven.” And Samberg told Michael B. Jordan to eat it — because the Black Panther villain is a “buff” snack.

As for Cecil B. DeMille Award recipient Jeff Bridges? Samberg simply told him, “I wish you were my dad.”

The hosts then mentioned some of the movies vying for awards, including Black Panther,A Star Is Born, and Crazy Rich Asians, which killed it at the box office but, according to Oh, didn’t impress many Asian mothers. At that point, the camera cut to a shot of Oh’s mom in the audience.

One of Oh and Samberg’s final bits involved Jim Carrey, who is nominated for his show Kidding but was sitting in the section set aside for film nominees. Noting his location, the hosts asked Carrey to move to the proper TV area, where he needed makeshift binoculars to see what was happening onstage.

What did you think about Sandra Oh and Andy Samberg’s Golden Globes opening? Let us know @BritandCo!

Desiree O
Desirée O is a ‘Professional Bohemian’ who loves anything and everything related to the arts, entertainment, and pop culture. She ADORES being a ‘Newsy’ for Brit + Co, covering all of the latest tidbits of awesomeness that you want to read about. When she’s not writing, she’s either making messy art, going on long adventurous walks with her camera, or poking around over at bohemianizm (http://www.bohemianizm.com/). You can find out about Desirée O and her work at http://DesireeO.com/ or follow her on Twitter @DesireeO.
Awards Shows
TV
Awards Shows Golden Globes