This “Fuller House” Refresher Will Get You Ready for Season 3 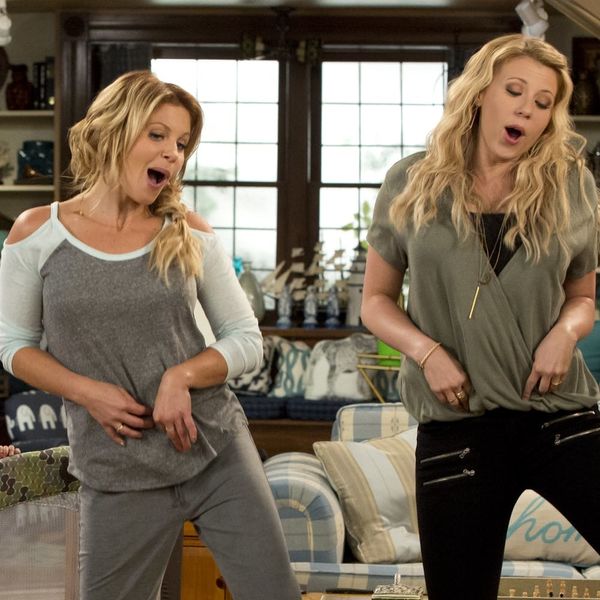 Last December, mere hours after Netflix debuted season two of Fuller House — the reboot of the feel-good ’90s sitcomFull House — Twitter came calling for season three. Fans will get what they asked for in just a couple of days, when the third season drops on Friday, September 22 — which just so happens to be the 30th (!) anniversary of the original show’s premiere date.

We already know that season three will feature a trip to Tokyo, some summertime fun, and Jodie Sweetin’s IRL broken ankle, but we also can’t wait to see how the show handles some of season two’s cliffhangers. Before you dive into a Tanner family binge-watch, allow us to refresh your memory about the major events of last year’s finale.

DJ proposed… to Steve’s girlfriend. In season two, DJ started to realize that she still had feelings for her high school sweetheart, Steve, even though she was dating Matt again. But Steve had already moved on — with a DJ lookalike named CJ, no less! In the finale, Steve asked DJ if he could propose to CJ at the New Year’s Eve party DJ was throwing. But CJ overheard Steve practicing his proposal on DJ (what a good friend!) and got the wrong idea. She started to storm out, only to be stopped by DJ — who did Steve’s proposal for him. CJ accepted, but the look Steve and DJ exchanged afterward told us the wedding might not happen in the end.

The family welcomed its newest member. Jesse and Becky returned to San Francisco to complete the adoption of their baby girl (named Pamela, after Danny’s wife and Jesse’s sister), which they’d announced at Thanksgiving. Joey and Danny came back, too, but a fight broke out when Jesse couldn’t decide who the baby’s godfather should be. Danny tried laying on the guilt, reminding them that he let their family live in his house for so long, but they fired back by pointing out how much babysitting money they saved him over the years. Then Danny insulted Jesse’s song “Forever” — how dare he! — which led to Jesse insulting Joey’s long-running puppet act with Mr. Woodchuck and Joey putting down Danny’s career by saying people only watched his show to see Becky. OUCH. Ultimately, though, they all made up, because this show is about nothing if not family.

Stephanie considered an even Fuller House. It was revealed in season one of the show that Stephanie isn’t able to carry children. When her adorably goofy boyfriend, Jimmy, mentioned in the season two finale that he wants kids of his own, Stephanie panicked and confided in her Aunt Becky. Though Steph and Jimmy’s relationship was still VERY new at that point, her chat with Becky about adoption was a really sweet moment — and we can’t help but wonder where the young love between Steph and her new beau could go.

The kids learned one of the Tanner family’s trademark life lessons. Jackson and Ramona were having their own New Year’s party with some friends upstairs, but little bro Max was cramping their style. Jackson tricked Max into thinking it was midnight way earlier than it was, and when Max realized what happened, he plotted the perfect little-brother revenge and trapped his siblings in the bedroom. DJ eventually made him apologize, but he was still mad when he stormed downstairs to where Danny, Jesse, and Joey were having their tense godfather fight. They reminded him (and themselves) that family comes first, even when you’re upset.

What do you hope to see on Fuller House season three? Let us know @BritandCo!