The One Prom Story You Should Read This Season 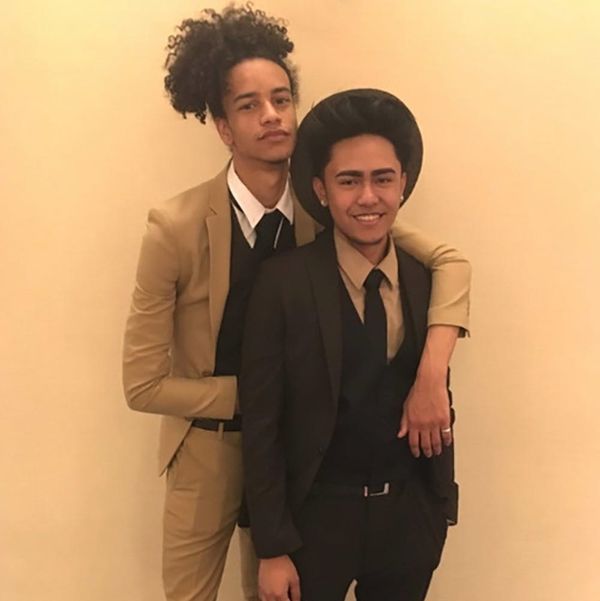 It’s prom season, y’all. While we’re all doing overtime at the gym in preparation for that upcoming summer vacay, the teenage generation is currently curating the perfect promposals and finding that one dress that’ll set them apart from the crowd (like this DIYed Beyoncé prom masterpiece). The classic high school event was just as much a right of passage for Maryland-based seniors Myren (@myrenthapimp) and his boyfriend Ralph (@omgitsralph) as everyone else, except for one thing: Myren’s parents wouldn’t allow him to go. So, the couple went ahead and pulled a classic teenager move and went behind their parents’ backs. To amazing results.

The Internet’s support for Myren was sparked by the photo posted above of him and Ralph dressed to the nines and ready to hit the town – er, prom. Since he posted on Twitter on Saturday Myren’s photo has received 20,000+ retweets and over 45,000 favorites. He has received super encouraging messages like, “As a dad, I can say that I hope my kids grow up to be as strong and true as you,” and “Look at that! Only in high school and already wiser and more mature than your parents.”

Since y'all keep asking:

No my parents do not know I went to prom. My parents only watch TV and check their emails so I'm safe.

Because Myren and Ralph’s story has become such a viral sensation, you’d think he would have been caught by now. But apparently, he’s still in the clear. Yesterday he took to Twitter yet again to provide an update on the prom saga.

Myren also spoke to BuzzFeed News and explained, “My dad said I knew better than to ask him. I knew I wouldn’t get a yes from them, but I thought maybe they would have a change of heart. They never did.” He went on to say, “My parents won’t let me see him […] It’s like I’m already living on punishment, so what do I have to lose by going to prom?”

As a coincidental bonus, prom also happened to fall on the couple’s seven month anniversary. Myren and Ralph, you two keep being the inspiring ballers you are.

Cortney Clift
Cortney is the senior writer and special projects editor at Brit + Co. She typically covers topics related to women's issues, politics, and lifestyle. When she's not buried behind her computer you'll find her exploring New York City or planning her next big adventure.
Prom
Entertainment
Prom
More From Entertainment