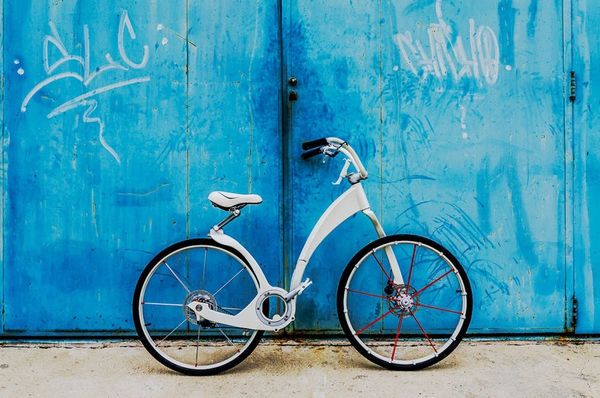 The latest smart cycling advancements have left us gushing over the prospective future of the two-wheeler — a keyless bike lock! An app-connected wheel! A foldable electric bike! Each integrates the bike more seamlessly into our modern commuter mindset where we want to pedal smarter, travel safer and still stay connected. Is that too much to ask? GiBike doesn’t think so. It’s a smart ride that integrates ALL of the above features (and more!) into ONE compact bicycle. Cue the mic drop.

We’ll start by saying we’ve never seen a more souped up smart bike. With more than 10 innovative features to its name, it’s safe to say GiBike is all about impressive specs… and they are. Hold onto your helmets, here they come.

GiBike’s most and least obvious feature is that it’s foldable. Most because you see here: the bike can collapse to half its original size in just three seconds, making it ultra pub trans-friendly and a perfect option for cyclists who live in small spaces. And least because it doesn’t look as gadget-y as other foldable bikes tend to, even without the traditional cross bar. That’s a design triumph.

The slick white frame is made out of aluminum to reduce the lb burden. The standard model weighs in at around 27 pounds (an average weight for a commuter bike), while the electric model weighs in at about 37 pounds. That’s a sizable difference, though remember, this bike is made to be folded and rolled, NOT carried. Plus, when you hear what that extra 10 can do for you, you won’t really care.

GiBke’s electric model is powered by a seriously high performance Lithium-Ion battery that can carry you 40+ miles without stopping to recharge (one day kids will ask “you actually had to PEDAL on bikes?”). That same battery can power your smartphone via an integrated USB port while you, um, steer. And you’ll want to keep it juiced — the bike’s yet-to-be-developed companion app promises to give riders full wireless control of all of GiBike’s tech- features, including front-and-back wheel-embedded LED lights, as well as a distance-triggered automated locking system (WHAT!). The app also boasts an intelligent GPS that can “detect” hazards and re-route you mid-ride. It’s integrated with Facebook, Twitter and, of course, map apps. Phew.

Oh and mechanical upkeep? There is none. GiBike is weather-sealed (no rust?) and claims that its grease-free carbon drive belt requires ZERO maintenance. However, there will most likely be need for a technical support team — that’s in the works, folks.

Did this bike just think of everything? We’re pretty much convinced. Pricing for both the electric and standard models is TBD — information likely to be released when GiBike’s Kickstarter campaign goes live “within the first few days of spring.” According to our GCal, they’re a few weeks behind. But we’ll cut them some slack — they may just be peddling the ultimate modern commuter bike.

What do you think of GiBike so far? Will you follow up with its Kickstarter? Would you pledge toward making this super-smart bike a real world whiz kid? Tell us in the comments below.