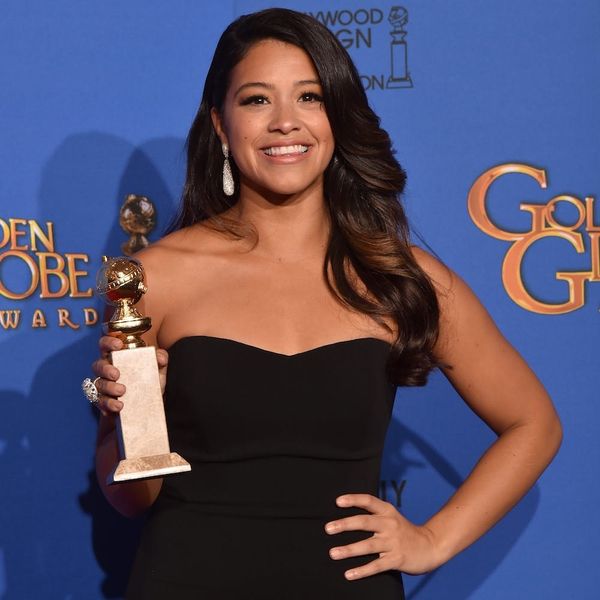 It’s Friday, and with the weekend only a few short hours away, it’s already off to a good start. This news about Gina Rodriguez, however, might just make even better. The Jane the Virgin actress + one-time face of Kipling is taking the cake for one of the most down-to-earth starlets currently starring in their own show… and she’s doing it with one award show gown. The star, who recently was nominated a second time for her role as Jane Villanueva on The CW show at the Golden Globes this year, might just be lending out her award show dress to a fan for prom.

In a Twitter exchange, a young fan named Jessica Casanova tweeted at Gina saying she’d love a chance to wear Gina’s gown to her prom. In a totally unexpected but awesome move, Gina responded with, “Maybe we can make this happen.”

Where do you live? I only own my first globes dress the one from last year…maybe we can make this happen 💃🏽 https://t.co/m16qdYETgF

The reason why she can only lend out the 2015 gown and not the 2016 navy blue Zac Posen dress is because the 2015 gown is the only one she actually owns. Plus, it was her first dress to her first Golden Globes, AND she won an award. Most people would probably frame that dress, but not Gina.

The dress in question is this stunning black, body-skimming number by Badgley Mischka with sheer + fringe details that Gina wore to the Golden Globes in 2015 when she won the award for Best TV Comedy Actress.

@HereIsGina you're so stellar for this! can we start a "Sisterhood of the Traveling Gina Golden Globes Dress?"

Other fans who caught the exchange tweeted at the actress suggesting that she start passing the Badgley Mischka dress around to fans, Sisterhood of the Traveling Pants-style.

I just melted. I swear I was just talking about this in the makeup/hair trailer on set. 🙌🏽🙌🏽🙌🏽 yes! https://t.co/NCkFQYiHPy

Clearly, Gina is a Sisterhood of the Traveling Pants fan, because she was all for the idea. She tweeted back to her fan enthusiastically saying that was exactly what she had in mind.

What a total sweetheart. Seriously.

What do you think of Gina’s gesture? Tweet us @BritandCo!

Kimberly Wang
Kimberly Wang writes about all things pop culture, tech, style, and beauty. She's a Bay Area transplant and has an MFA in Creative Writing from Columbia University. On a sunny New York day, you can find her hanging out with her mini schnauzer Isabelle Jellybean on a blanket in Central Park.
Golden Globes
Style News
Golden Globes
More From Style News