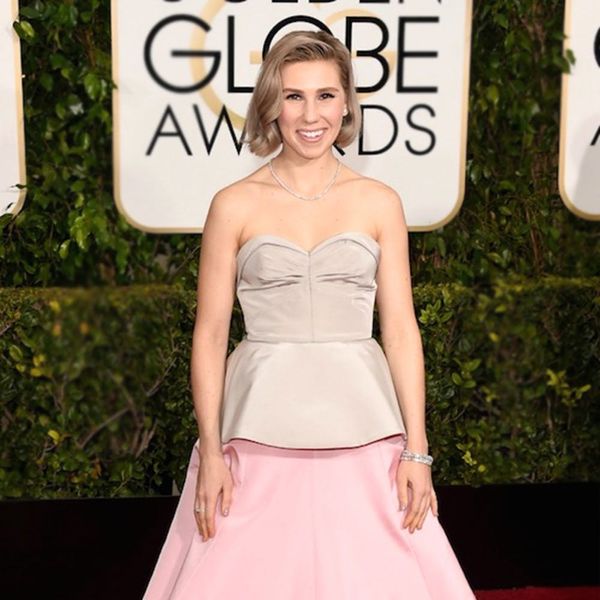 Last night marked the official start of awards season, with the powerful comedic duo Amy Poehler and Tina Fey hosting the 72nd Golden Globe Awards. As always, with the honor and prestige of the actual awards comes the glitz and glamour of the red carpet. From high necklines to beaded embellishments, there were a variety of trends among the stars’ chosen gowns, and now it’s your turn to shine in ’em. Here are some of our favorite looks from last night, accompanied by 21 beautiful ways to rock ’em yourself.

1. Gathered Sheath Dress ($168): While she ended up changing before going on stage, our lovely host Amy Poehler chose a conservative and contrasting shade of blue for her time on the red carpet. It’s perfect for work, or a formal dinner. (Photo via Jason Merritt/Getty)

2. Why Not Maxi ($178): Ever since she rose to a household name after starring in the thriller Gone Girl, Rosamund Pike has made some great fashion choices. And while this one is a little more daring, Rosamund carries it off with her classic English grace. (Photo via Frazer Harrison/Getty)

3. Crepe Wrap Strap Midi Dress ($48): Orange Is the New Black‘s Taylor Schilling tends to stick to more neutral tones, so we’re so excited that she chose this bright shade of red for the Globes. Paired with light, fresh-faced makeup, this look was definitely one of our favorite combinations of the night. (Photo via Jason Merritt/Getty)

4. Sequin Shift Dress ($69): Best Actress in a Drama winner Julianne Moore was indeed dressed for celebration in this shiny number. Even though New Years just passed, you can still rock silver any night of the year. (Photo via Jason Merritt/Getty)

6. Crop Swing Dress ($54): Camila Alves has basically been a staple at red carpet events over the last year, and even though hubbie Matthew McConaughey wasn’t a winner last night, her memorable fashion choices will help her keep that status. (Photo via Jason Merritt/Getty)

7. Strapless Swiss Dot Maxi Dress ($68): Jane the Virgin star Gina Rodriguez is busy making some serious history, folks. Not only is she the first person to ever be nominated for a Golden Globe (and win!) from the CW, but she’s already setting fashion trends with this solid and sheer combo. (Photo via Jason Merritt/Getty)

9. Swing Dress With One Shoulder ($34): Julia Louis-Dreyfus looked as beautiful as ever in a signature, solid-colored gown. Why fix what’s not broken, right? (Photo via Jason Merritt/Getty)

10. Lace Skater Dress with Embellishment ($165): Okay, wait. Allison Williams is definitely tied with Julia Goldani Telles for best dressed, because WOW. Even though this gown is a complex combination of tulle, tiers, embellishments and ruffles, it’s classy and not one bit overdone. (Photo via Frazer Harrison/Getty)

11. Embellished Geo Tulle Dress ($143): Ellie Kemper has a new series (with Tina Fey!) coming out soon, so we have a feeling we’ll be seeing a lot more of her on the red carpet. That being said, she’s already a pro at following the trends, as this sheer and embellished dress was unique but fit right in. (Photo via Jason Merritt/Getty)

12. Curve Swing Dress With Raglan Sleeve ($57): Gone Girl author and screenwriter Gillian Flynn chose a hue that was sort of a cross between eggplant and burgundy with a touch of marsala, and we’ve fallen head over heels for it. This is definitely a winter hue, guys, so jump on this as soon as possible. (Photo via Frazer Harrison/Getty)

13. Make Me Blush Dress ($44): Emily Blunt was basically a Grecian goddess in this light and flowing white gown. And when you throw in her adorable husband, John Krasinski? That’s a Hollywood power couple if we’ve ever seen one. (Photo via Jason Merritt/Getty)

14. Petite Jumpsuit With Sequin Top ($143): Bravo, Emma Stone. Bravo. Fancy jumpsuits are something we’d like to see a lot more of. (Photo via Jason Merritt/Getty)

15. Strapless Ruched-Skirt Dress ($338): Speaking of power couples, Channing Tatum and Jenna Dewan-Tatum were the absolute cutest. But we just had to share a picture of Jenna alone. We mean, just look at her! (Photo via Jason Merritt/Getty)

16. High Neck Dress With Sequin Bodice ($73): Jennifer Aniston opted for a look that reminded us a whole lot of a high school prom dress, and there is nothing wrong with that. (Photo via Jason Merritt/Getty)

17. Luck Now Dress ($99): It’s no secret that we have a huge crush on Kerry Washington (in addition to her alter ego Olivia Pope). This off-the-shoulder look is only adding to that. (Photo via Jason Merritt/Getty)

18. Plus Flora Embellished Dress ($237): Miss Golden Globe Greer Grammer (who also stars in MTV’s Awkward) was basically a picture of perfection in her blush-colored look. We chose to focus on the embellishments and sweetheart neckline for our version, because that’s totally what makes the gown. (Photo via Frazer Harrison/Getty)

21. Bonded Midi Dress With Plunge Neck ($143): And finally, Lena Dunham was radiant in her dipped hem dress. Our choice is definitely a winner for formal events like a black-tie dinner, or even a wedding. (Photo via Jason Merritt/Getty)

Who wore your favorite look of the night? Share it with us in the comments below!

Sonia Rao
Sonia is a determined, television-obsessed gal on a quest to find the best cinnamon waffles recipe out there. If she isn’t researching the latest fashion trends or avidly crafting, you can catch her curled up on the couch with a few (meaning a billion) cookies, watching the hilarious antics of Leslie Knope or Mindy Lahiri. Sonia loves writing for Brit + Co as much as she loves desserts, and is equally proud of her quirky, pop culture reference-filled Twitter feed.
Get the Look
TV
Get the Look Lookalike Red Carpet

Your Guide to Cooking a Complete Pasta Meal in One Pan

8 Lucky Foods to Eat During the Lunar New Year

Make Your Weekend Sweeter With These Traditional Norwegian Pancakes