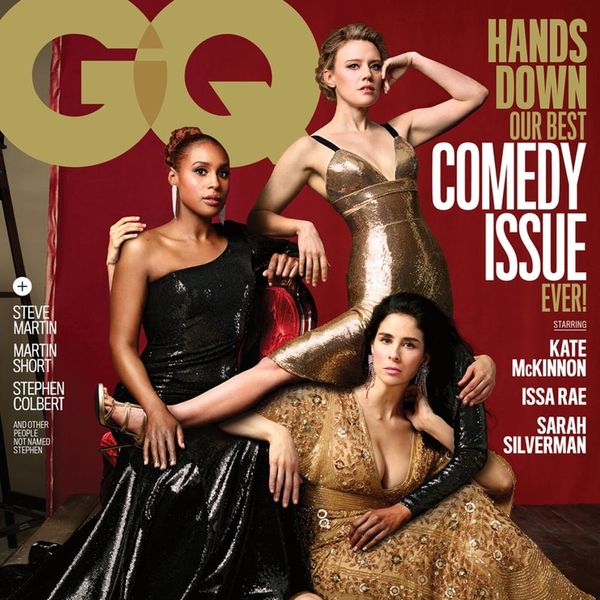 McKinnon, Rae, and Silverman look stunning in the image, which was shot by Martin Schoeller, but there’s something… not quite right about the photo. Maybe it’s the extra legs and stray arms all over the place?

The cover is a spoof, of course, of Vanity Fair‘s Hollywood issue Photoshop fail, which gave Oprah Winfrey three arms in a picture with Reese Witherspoon. “How can we expect her to juggle it all with just two hands?” the magazine joked on Twitter at the time, adding that the error would be corrected online.

Like Vanity Fair, GQ is taking responsibility for its (fake) fail, releasing a tongue-in-cheek statement saying, “GQ would like to apologize to Kate McKinnon, Issa Rae, and Sarah Silverman for the egregious mistakes made in the process of creating the cover for our 2018 comedy issue, the latest in our pantheon of mostly annual love letters to the funniest humans we know. Our intention was to celebrate the three super-funny superstars, who are all that is smart and perceptive and riotous and necessary in comedy right now. We deeply regret that the results violated GQ‘s rigorous standards of editorial excellence and the laws of nature.”

The statement also promised — “because this sounds like the right thing to say” — that the magazine would conduct a “thorough internal audit” of what went wrong, the results of which would be published “quietly, in 17 months, on Medium.”

Not surprisingly, the joke was a hit on Twitter. Even Vanity Fair, which is published under the Condé Nast umbrella, got in on the fun, tweeting, “It’s not going out on a limb to say we love Issa, Kate, and Sarah. Props to @GQMagazine for getting a leg up on this trend.”

The June issue of GQ will be on newsstands in New York and LA on May 22, and nationwide on May 29.

What do you think of GQ’s comedy issue cover? Let us know @BritandCo!