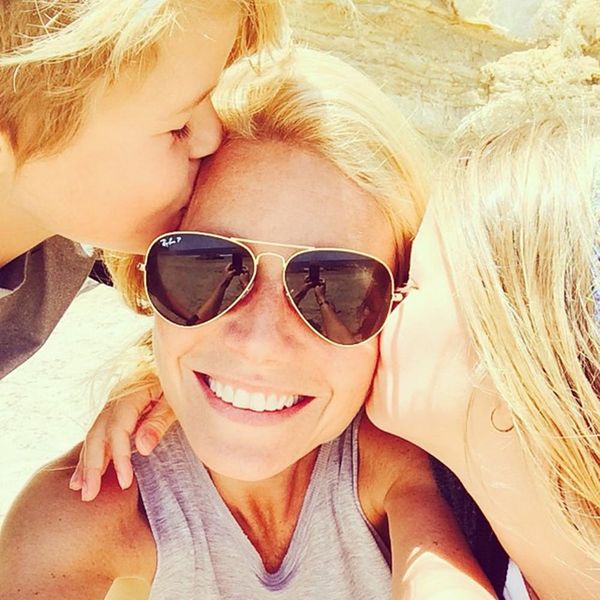 As a 29-year-old who grew up in the ’90s/’00s, I was a teenager raised right after the beeper generation and was an early adapter to the “Can I get a cell phone?” question. For parents raising tweens today, that discussion (more like a very heated debate, I’m sure) must be a difficult one — starting from a much, much earlier age than when I was a high school junior sending my very first SMS on a “mostly for emergencies only” Kyocera. Today, Gwyneth Paltrow spilled to the ~1,000 women at her BlogHer Lunch Keynote that she’s in the middle of that debate right now with her own kids.

Goop’s founder and current CCO Gwyneth Paltrow took the stage at this year’s BlogHer conference to talk about her business, her family and her favorite Glee song (“Landslide” FYI). When the question of what it’s like to raise little ones in the digital age came up, GP told a story that was more relatable than you might expect. “They have iPads,” she revealed. “And my daughter is furious that I haven’t gotten her a phone yet.” The audience (maybe a few moms in there ;) let out a chorus of knowing mmmhmmmmmms, laughs and claps.

“I don’t want to get her [11-year-old Apple] a phone!” Paltrow laughed, motioning to the audience to back her up. “That’s too young!” And, naturally, while the subject of the convo may be different for this generation of tweens, the argument is still the same. The goop founder shared that the pleas are: “‘This friend has it and this friend has it — I’m like, ‘you’re 11!'”

Fair. But like any parent knows, there has to be some compromise to avoid total familial warfare. Paltrow admitted that she (smartly) doesn’t want to create a covetousness around the phone to make that forbidden fruit look even juicier: “She has a private Instagram account and I don’t particularly love it, but I don’t know! This is the world we’re in.”

Also due for an update — the stranger danger convo. The one that Gwyneth has had with her two children (Apple and Moses Martin, ages 11 and 9, pictured above in this shot from a recent Instagram) are that “some people in the world are creepy, you gotta be a little careful. Internet safety is a huge thing for any parent… it completely freaks me out. It’s a conversation I have a lot with my friends who are moms. Hopefully I can stave it [the dreaded phone] off for a little while longer.”

Are you at #BlogHer2015 this year? What are the highlights so far for you and your crew? Share with us below!

Lisa Raphael
In her past professional lives, Lisa has served the masses as the Editorial Director at Brit + Co, Bieber Whisperer at J-14, Golden Girls Fan Club Prez at Lifetime and Talk Show Host Understudy to Katie Couric. Now, she's taking on the sports world at The Relish, teaching Hairography 101 in her spare time and will forever be trying to fill the hole Zayn Malik left in her heart.
Gwyneth Paltrow
Parenting
Gwyneth Paltrow Parenting
More From Parenting