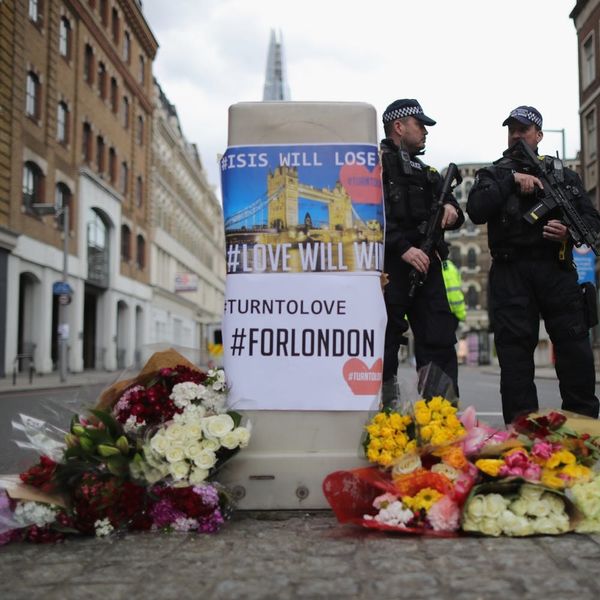 It was just under two weeks ago that the world watched in horror as an arena full of young girls was attacked with a terrorist bomb at an Ariana Grande concert in Manchester. With its victims still struggling to pick up the pieces of the tragedy they endured and a benefit show planned by Grande in their honor (tune in after the NBA finals on ABC), another shocking attack has occurred in the UK, this time in London.

Seven people were killed and 48 more were injured after a vehicle drove into a crowd of pedestrians on the London Bridge. The reign of terror continued as three men exited the car, wielding knives and embarking on a “stabbing spree.” Though CNN reports that police responded in just eight minutes, killing three men in faux suicide vests on sight and arresting 12 more separately in East London, 21 of the attack’s victims remain in critical condition. Hollywood is now responding to the sickening incident: See their words of love and support below.

Our planet is beautiful, but at times our world is ugly. 🙌🏻❤️ for London pic.twitter.com/o8ORDssjp5

1. Sarah Michelle Gellar: Posting a pic of the British flag, SMG summed up the attacks of recent weeks, saying, “Our planet is beautiful, but at times our world is ugly.”

thoughts are with the people of London today after yet another horrific attack .

2. Niall Horan: Former One Directioner and UK-bred Niall Horan said that his thoughts were with the victims.

3. Ariana Grande: Grande, who was present for the original Manchester incident, tweeted her support for London.

My heart breaks again for London, the victims, their families and a country I love & once called home. Keeping all in my heart & prayers

4. Chelsea Clinton: Clinton, who once lived in London, said that her heart was breaking for the city and its victims.

More heinous and cowardly attacks, more pain... Our thoughts and prayers are with you #London

6. Leah Remini: The Kevin Can Wait star had a simple request for her fans: Pray for humanity.

8. Kate Beckinsale: The English actress posted a shot of her country in a happier time, saying, “Homesickened. Love to everyone.”

song of the day: MY NAME IS LONDON TOWN – REG MEUROSS pic.twitter.com/3FH7UK6bjV

9. Rob Thomas: The Matchbox Twenty singer offered up a song in honor of the country.

Our world is so dark and scary at the moment. Please say your prayers!! Try to be kind and loving! Love will always win! #PrayForLondon

13. Khloé Kardashian: Though Kardashian may be embroiled in some drama of her own, the reality starlet took time out to offer her thoughts and words of positivity in this “dark and scary” moment.

14. Demi Lovato: The “Confident” singer had a simple message of prayer.

The thugs who mowed down innocent people would love to think of the UK 'reeling' but it isn't. Don't confuse grief with lack of courage. https://t.co/9MEUfPLnkv

15. JK Rowling: English author Rowling reminded us all not to “confuse grief with lack of courage.”

I love you London. This news devastates me and I don't feel a tweet to be enough but know my heart and prayers are with u. #londonbridge 🙏🏼

17. Gina Rodriguez: Rodriguez said that while a tweet wasn’t enough, her heart and prayers were with the city.

How are you showing your support for London? Tell us over @BritandCo.