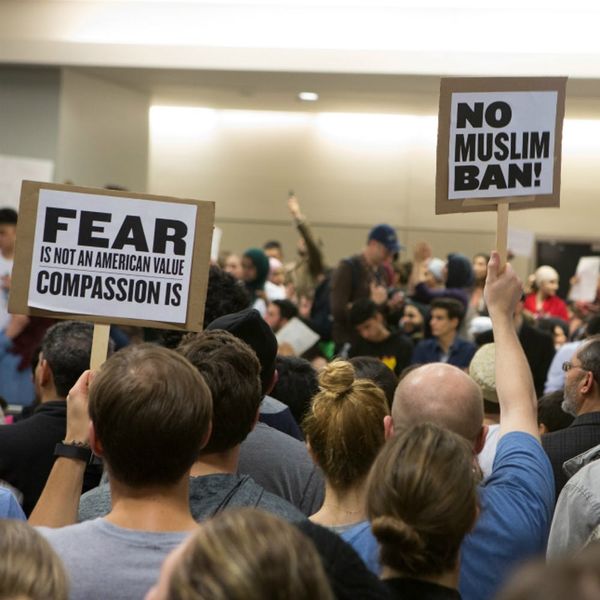 If President Trump is to be called anything, let it be swift. After being sworn in just over one week ago, he’s made sweeping executive orders in his first week that have resulted in everyone scrambling to try and recap exactly what’s happened in his first 10 days in office. With Friday’s ban on immigration, even visa or green card holders could potentially be barred from entering the country, a fact which saw many taking to social media and US airports the nation over in outrage. A federal judge ruled against sending those arriving to the US home late Saturday night, but there’s still a long road ahead with regard to this particular battle. Now, tech industry giants are voicing their thoughts against the ban.

With many tech industry insiders having recently been tapped by the administration to act on committees, like Uber’s Travis Kalanick, Tesla’s Elon Musk and others, you might think the industry would be silent or complacent while working with the government. Not so. Companies like Apple, Google, Facebook and others took to social media and spoke to their staff with a strong anti-ban message.

Many people negatively affected by this policy are strong supporters of the US. They've done right,not wrong & don't deserve to be rejected.

Elon Musk was passionate in standing with Muslims who had suddenly been banned from the country, while Uber’s Kalanick, who faced a lot of pressure with the #DeleteUber hashtag rising up, penned a thoughtful message on Facebook.

Apple’s CEO Tim Cook, who is currently in DC speaking with elected officials, made it clear that the company would fight for the rights of its 200+ staff members directly affected by the ban and that Apple does not support the policy.

Facebook has similar problems, with CEO Mark Zuckerberg also penning a lengthy Facebook post. “Like many of you, I’m concerned about the impact of the recent executive orders signed by President Trump,” he wrote, with a Facebook spokesperson saying, “We are assessing the impact on our workforce and determining how best to protect our people and their families from any adverse effects.”

While the breadth of the fallout from Friday’s order remains to be seen, the fact that some of the very people President Trump has chosen to work with are publicly expressing their distaste for his decisions has got to sting. See the full list of those speaking out here.

Fingers crossed they’ll be able to make some headway toward a solution.

How are you working to support organizations affected? Tell us @BritandCo!

Kat Armstrong
Kat has been a writer, social media maven and mom for longer than she's willing to admit. She's also spent time in front of and behind the camera, interviewing celebs, politicians and acting as a producer for fashion and artistic photography shoots. When she isn't writing for various orgs and publications, she's hanging with her kids, husband and French Bulldog, Peter, in Toronto, Canada.
Apple
Politics
Apple Google Politics