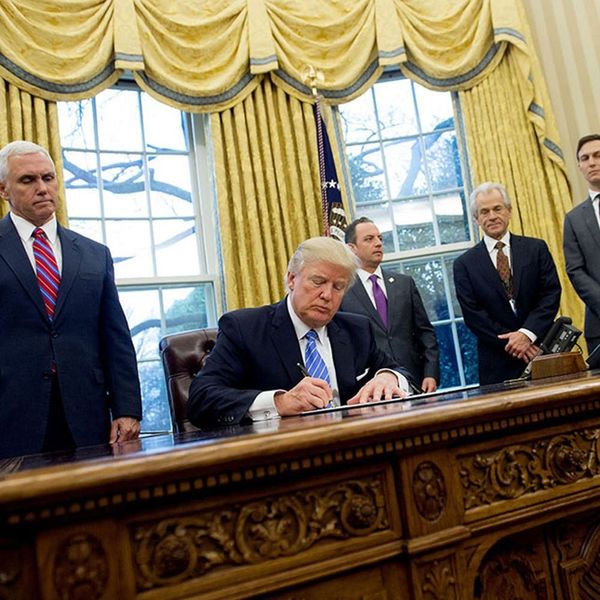 It’s hard to believe, but it’s only been seven days since President Trump’s inauguration. He’s been busy since then. To be honest, he’s been so busy it’s been hard to keep up with it all. He’s actually building the wall along the border of Mexico. There’s now a huge tax on Mexican imports. Or, wait, maybe not? Crackdowns on immigration. Threats of revoked funding for women’s healthcare worldwide… we could go on. If you’re a little overwhelmed by it all, here’s a quick rundown on the most important executive orders and decisions Trump has made since stepping into the Oval Office.

While surrounded by a room full of men, President Trump reinstated an order that has been revoked and enforced by Republican and Democratic presidents since Ronald Reagan. The policy, more formally referred to as the Mexico City Policy, essentially cuts family planning funds from health centers overseas.

It should be noted that even before this was put back into place by President Trump this week, US funds were not allowed to be used to fund abortions abroad. This rule puts extreme restrictions on what doctors in foreign countries can do in their clinics should they choose to accept money from America, and considering we are the biggest donors when it comes to supporting women’s health in developing countries, that puts them in a bad place. Accepting the money with the GGR in place means they can’t counsel women on a full range of health options, make referrals or even give them basic information.

The reinstatement has prompted outrage from prominent women’s rights figures like Planned Parenthood’s President Cecile Richards, as well as Lean In author and Facebook COO Sheryl Sandberg. In a Facebook post about the GGR, Sandberg writes, “We don’t have to guess — we know what this will do. The last time the global gag rule was in effect, research showed more women who lost access to contraception had unwanted pregnancies and abortion rates doubled. The best way to prevent abortion is through more family planning services, not fewer.”

THE WALL ALONG THE MEXICO BORDER

The wall along the Mexico border has been a pivotal part of President Trump’s campaign from the get-go. Many thought it was something he wouldn’t follow through with when the time came, but President Trump put any remaining doubt about that to rest on Wednesday when he signed an executive order that paves the way for the Department of Homeland Security to begin construction on the controversial wall.

But considering the wall could cost upwards of $20 billion, the question of how it will be paid for still remains. President Trump’s team has been adamant that Mexico will pay for it, but Mexico’s president disagrees. In a speech directly addressing the issue, Enrique Peña Nieto said, “I am dismayed by and condemn the decision made by the United States to continue building a wall that for many years, far from uniting us, has divided us. Mexico does not believe in walls. I have said it again and again: Mexico will not pay for any wall.” The two leaders were scheduled to meet next week but have since canceled after the tension arose.

In a press meeting with Sean Spicer, the new White House press secretary, Spicer said that the wall might be paid for by imposing a 20 percent tax on all Mexican imports. But after the idea of the major tax caused an uproar, Spicer followed up saying that the tax spike isn’t something that’s set in stone but was brought up “to show that there are ways the wall could be paid for.” So, the verdict is still out on where exactly those billions of dollars are going to come from and which country will ultimately pay for it.

When signing the order on the wall, President Trump also signed two orders reviving programs that will dramatically change federal immigration policy. The first allows the federal government to work with local and state law enforcement agencies to arrest, detain and deport unauthorized immigrants possessing criminal records. However, Trump’s definition of “criminal” is noticeably vague in this case.

The New York Times writes, “Mr. Trump’s order focuses on anyone who has been charged with a criminal offense, even if it has not led to a conviction. He also includes, according to language in the order, anyone who has ‘committed acts that constitute a chargeable criminal offense,’ meaning anyone the authorities believe has broken any type of law — regardless of whether that person has been charged with a crime.”

The second “suspended entry of all refugees to the United States for 120 days, barred Syrian refugees indefinitely, and blocked entry into the United States for 90 days for citizens of seven predominantly Muslim countries: Iran, Iraq, Libya, Somalia, Sudan, Syria and Yemen.” As part of that, “The Department of Homeland Security said that the executive order barred green card holders from those countries from re-entering the United States.” All of this caused a huge uproar at airports as supposedly legal residents were prevented from returning to their families and homes from abroad.

These two immigration-related reforms prompted Facebook’s Mark Zuckerberg to speak up via a post on social media yesterday, along with many others. Zuckerberg writes, “We need to keep this country safe, but we should do that by focusing on people who actually pose a threat. Expanding the focus of law enforcement beyond people who are real threats would make all Americans less safe by diverting resources, while millions of undocumented folks who don’t pose a threat will live in fear of deportation.”

Also, the move prompted Google to ask all their staff to return to the US from abroad. Google CEO Sundar Pichai said in a company memo on Friday, “It’s painful to see the personal cost of this executive order on our colleagues. We’ve always made our view on immigration issues known publicly and will continue to do so.”

This immigration order also plans to revoke federal funding from “sanctuary cities” that have either legislations or traditions protecting undocumented workers. There are more than 140 sanctuary jurisdictions in the US. These new policies could affect an estimated 11 million immigrants currently residing in the US.

After months of long and brutal protests, in late 2016, the US Army Corps of Engineers announced it would halt construction on the Dakota Access Pipeline to “allow for discussions with the Standing Rock Sioux Tribe.” This came as a great relief for those on the reservation who had spent months in freezing conditions fighting to keep the pipeline from potentially damaging sacred land and tainting their drinking water.

However, on Tuesday, President Trump signed an order expressing his full support for the pipeline. Thing is, it’s technically not up to President Trump to decide whether this project moves forward or not. That decision is in the hands of the US Army Corps. President Trump’s order essentially implies that he backs the construction and to hurry the process up. Currently, the Army Corp is preparing an Environmental Impact Statement, which explores alternative routes and takes public comment into account. It’s a process that could take a year or more. President Trump’s order is essentially telling the Army Corps that’s not necessary and to“rescind or modify” the idea of an EIS. It’s worth mentioning that the decision makers are ultimately the Assistant Secretary of the Army for Civil Works and the US Army Corps of Engineers and that both of these positions are expected to be filled by President Trump.

Moving on to the Keystone XL project. This is a proposed 1,179-mile pipeline that would run from Canada to Nebraska. Because it crosses international borders, the firm behind the proposed pipeline (TransCanada) was required to submit an application with the State. Obama turned it down, but now, in an executive order, President Trump has invited TransCanada to refile the application. TransCanada did so by Tuesday afternoon.

TransCanada would still be required to get additional permits from the Army Corps and the Department of Interior to finish the pipeline, so this pipeline isn’t resting solely on President Trump’s signature, but it will be an uphill battle.

Even though he won the presidential election, President Trump has remained committed to his belief that millions of people voted illegally on election day. Despite any hard evidence suggesting that’s the case, he has called for a federal investigation into the issue on Tuesday via Twitter.

I will be asking for a major investigation into VOTER FRAUD, including those registered to vote in two states, those who are illegal and….

even, those registered to vote who are dead (and many for a long time). Depending on results, we will strengthen up voting procedures!

Due to a lack of evidence that any massive voter fraud actually occurred on election day, this investigation appears to mostly be about proving he won the popular vote (which as of now belongs to Hillary Clinton). According to the Associated Press, he told congressional leaders that “he would have won the popular vote in the 2016 election if the million to five million immigrants living in the country illegally hadn’t voted.”

Strangely enough, President Trump’s claims appear to be fuelled by unverified data from a man named Greg Phillips who tweeted this shortly after the election:

Phillips runs an app called VoteStand where you can submit suspicion of voter fraud, keyword here being suspicion. VoteStand only has about 11,000 downloads. However, President Trump has latched onto this number citing it shortly after the election.

In addition to winning the Electoral College in a landslide, I won the popular vote if you deduct the millions of people who voted illegally

And today he has made a direct mention to Phillips with this tweet:

Look forward to seeing final results of VoteStand. Gregg Phillips and crew say at least 3,000,000 votes were illegal. We must do better!

An official investigation would need to be conducted through the Department of Justice. President Trump has not filed a formal order yet but is expected to do so next week. It is likely that he is awaiting Phillips results before moving forward.

What are your thoughts on some of the political events that have occurred this past week? Share with us on Twitter @BritandCo.