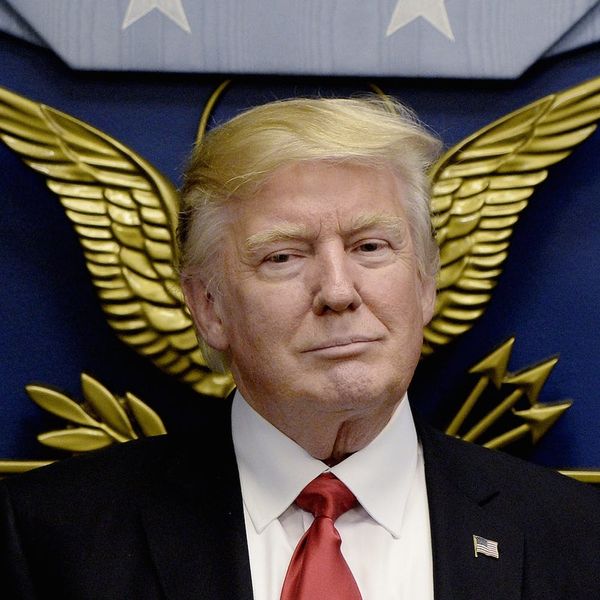 While petitions asking President Trump to release his taxes are breaking White House records and a truly unexpected group is announcing its intentions to run for office, POTUS has spent his first week in office strictly focused on bringing his promises from the campaign trail to fruition. Among those? Building the now infamous wall along the US/Mexico border, banning the entry of all Syrian refugees and taking a seriously unforgiving stance against unauthorized immigration.

On Wednesday, the President visited the Department of Homeland Security and signed two historic executive orders for the “construction of a wall on the southwest border, a crackdown on so-called sanctuary cities and directives that would make effectively every undocumented immigrant a priority for deportation,” reports Huffington Post. On Friday, he followed those up with an order “that indefinitely suspends admissions for Syrian refugees,” shuts down the the refugee program in its entirety for 120 days and limits the entry of anyone arriving from the countries of Iran, Iraq, Libya, Somalia, Sudan and Yemen for 90 days, reports CNN. New reports state it could also affect US green card holders who travel abroad, which will be reviewed on a case-by-case basis.

I promise that our administration will ALWAYS have your back. We will ALWAYS be with you! pic.twitter.com/D0aOWhOH4X

The orders went into effect immediately, with all refugees who were airborne at the time of signing “stopped and detained at airports, [which] created a legal limbo for people on their way to the United States and panic for families who were awaiting their arrival,” writes the New York Times.

While signing the order at the Pentagon, President Trump defended his actions by declaring: “I am establishing new vetting measures to keep radical Islamic terrorists out of the United States of America. We want to ensure that we are not admitting into our country the very threats our soldiers are fighting overseas. We only want to admit those into our country who will support our country and love deeply our people.” Iran has since followed suit, placing its own ban on US immigrants.

Immediately following the news, protesters were quick to organize demonstrations inside airports around the country, including JFK in New York.

Others took to social media to have their voices heard: The #NoBanNoWall hashtag, which we initially saw gaining traction on Wednesday, blew up on Twitter, as did yesterday’s #NationalHolocaustDay/#NationalHolocaustRemembranceDay, with many reminding others that Anne Frank was once a refugee turned away from US shores.

America is a nation of immigrants. We are descended from them, and we cannot turn our back on them now, when they need it most. #NoBanNoWall

"Anne Frank could be a 77-year-old woman living in Boston today." But was denied a US visa. https://t.co/BeZ2ZpqLhl #HolocaustMemorialDay

While celebrities, like Lindsay Lohan, have also been showing their support for refugees, it’s the personal stories appearing across social media that have perhaps touched us most.

If Trump was @POTUS in 1980, my Iraqi family would be denied entry. I was 4 & we were welcomed. We are a country of immigrants. #NoBanNoWall

My wife's grandmother passed away today. I'm unable to attend her funeral for fear of being denied re-entry into the US. #NoBanNoWall

.@POTUS I was once undocumented – now, I’m a member of Congress. #NoBanNoWall

“I was once undocumented — now, I’m a member of Congress,” wrote Republican Ruben J. Kihuen.

What do you make of the newly signed orders? Tweet us @BritandCo.