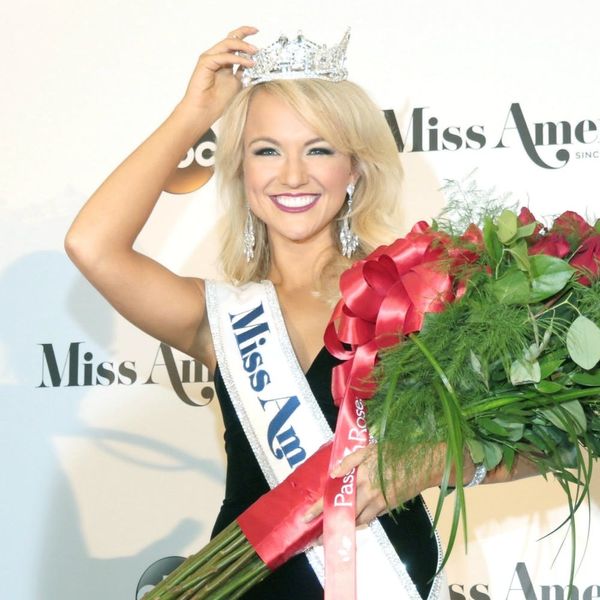 On September 11, 2016, Savvy Shields’ world was forever changed. In front of approximately seven million at-home viewers (not to mention a panel of seven celebrity judges), the 21-year-old was crowned Miss America 2017, and it’s pretty much been a whirlwind ever since. In the last three weeks alone, she’s been to New York, LA and Atlantic City, had countless radio and television appearances and met with hundreds of adoring fans.

While it’s enough to make anyone’s head spin, for Miss America (previously Miss Arkansas), it’s just another day in the life: one that now begins as early as 5am. “Before, it would be sleeping in, going to my [college] classes, working out and going back to sleep at a somewhat early hour,” Savvy tells us.

From there, it’s time to get beautified — but nothing too crazy. “You kind of have the same hair and makeup,” she tells us. For Savvy, that means curled locks and a quick touch-up, which by now, she’s gotten down to a science. Regularly doing her own hair and makeup, she says, “I will curl my hair, I’ll let it sit, I do my makeup (which takes her — drumroll, please!— 13 minutes), I shake my curls out and hopefully we’re good to go!”

Getting dressed is a breeze (“I wear the same things every day,” she reveals), since Miss America’s (wrinkle-free!) wardrobe is provided by designer Justin Ribkoff, and then next, it’s on to appearances — usually morning radio or TV — all before breakfast.

When she does finally get a “quick bite to eat,” she’s careful to choose it wisely: It is, after all, part of her personal platform to “Eat Better, Live Better.” Aiming to “educate people on how the foods we eat make an impact on our lives as a whole,” Savvy says her interest in helping others to live a healthy lifestyle really began in college. After going from her parents’ home, where she regularly ate healthy meals, to a lifestyle of carefree pizza noshing, she quickly noticed a change within. “I was feeling tired; I lost concentration,” she says. “I realized I need to take charge of my health.”

Now leading by example to motivate others to do the same, she keeps it clean even when she’s on the road, as she now so often is. “On a typical day, I love eggs in the morning [and] a cup (or 10 — Savvy is a coffee fiend of epic proportions) of coffee with that,” she says. “For lunch, if you’re going out to eat (a common occurrence for Miss America), you can almost always find salmon and vegetables.”

It’s fuel she’ll need for her second half of the day, which is likely to be jam-packed with a variety of things, from more media interviews to public appearances and events. Some days, that might mean trips to the top of the Empire State building, while others, it’s driving along the beaches of Cape May. It could also mean more meaningful visits, like her recent trip to the Children’s Hospital of Los Angeles, where she met with 25 different ailing children.

One of my favorite days as Miss America was when I visited the Infusion Center at @childrensla. I got to spend time with the most courageous and inspiring #MiracleKids. I am so honored to be the National Goodwill Ambassador for @cmnhospitals and can not wait for my next visit! // #missamerica #childrensmiraclenetworkhospitals

It was an experience Savvy counts as her favorite moment as Miss America thus far. “I left the hospital not wanting to leave,” she says. “Every single kid is truly the most courageous person in the world — and they’re only 7-10 years old. You hope that you’re bringing [them] a little bit of light and a little bit of laughter.”

For Savvy, that’s what it’s all about. “I’m getting to meet so many humans,” she says, which for her, couldn’t be more ideal. “I love people — I really do,” she says. “It’s my favorite part of the job.” (No, but really — she’s one of the rare celebs who encourages you to come say “hi,” should you see her out and about.)

It’s also a lot of work, however, and after a long day of it, there’s more to be done at home if she wants to keep up on her hobbies, which include art (she’s a fine arts major; her most recent project being a huge canvas that she traced a ballet sequence of steps in charcoal) and dance — her lifelong dream (in addition to being Miss America, of course) is to become a backup dancer for Bey.

“I think you have to make time for it,” she says. “There [are] times you want to go to sleep, but you also want to take care of that”— even if that means stretching every night before bed to keep that flexibility.

Still, she wouldn’t trade it for the world. “It’s something you dream about your whole entire life, [but] you never actually picture it happening in reality,” she tells us. After all, as she puts it best, “It’s not just changing my life for this next year,” she tells us. “It’s changing… the rest of my life.”

Would you like to walk a day in Savvy’s shoes? Tell us over @BritandCo!

Nicole Briese
Nicole is the weekend editor for Brit + Co who loves bringing you all the latest buzz. When she's not busy typing away into the wee hours, you can usually find her canoodling with her fur babies, rooting around in a bookstore, or rocking out at a concert of some sort (Guns N' Roses forever!). Check out all her latest musings and past work at nicolebjean.com.
interview
Celebrity News
interview